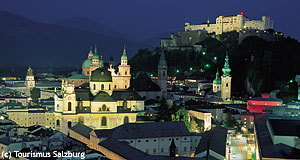 Somewhat surprisingly for a city-state with Non-secular, Catholic Prince Archbishops, Salzburg has a rich Jewish heritage that goes back very far in history. Jewish people were reported to arrive in Salzburg at the days of the Roman Empire, when the city at the location of today′s Salzburg was called "Iuvavum".

After the withdrawal of the Romans and the decay of Iuvavum, Salzburg was re-founded (see "Salzburg history") in the 8th century. Bishop Arno of Salzburg (785-871), who was a friend and advisor to Emperor Charlemagne, was treated by a Jewish doctor - this record of a "medicum iudaicum" is the oldest for Jews in Salzburg in post-Roman times.

Documents from the 12th century refer to the "Judengasse", the "alley of the Jews". This alley is an extension of the world-famous Getreidegasse and near the cathedral. A busy shopping street, it is still one of the central attractions in Salzburg. The house in the Judengasse 15 was referred to as a house of prayer and a synagogue in a record from 1370. Later, it became the site for the pub "Höllbräu" and today hosts a 5-star hotel.

1492: Jews are banned from Salzburg

In late medieval times, Jewish people in Salzburg had to face threats and pogroms. Peaking in 1492, Jews of Salzburg were burnt near today′s Müllnerbräu and Jewish people permanently banned from settling in Salzburg.

This ban prevented the development of a Jewish community in Salzburg until 1868. In 1893, a synagogue was built in Lasserstraße 8, which still exists and is in use. One year later, a Jewish cemetery was built in Aigen. As much as the synagogue, the cemetery is still in place.

In 1885, Theodor Herzl - a Jewish Austrian lawyer, journalist and father of the Zionist movement - stayed in Salzburg as a trainee at Salzburg′s province court. He referred to Salzburg in a letter as a place at which he spent some of his happiest hours. However, he pointed out in the same letter, that there was a lot of anti-Semitism in Salzburg which would make a longer stay impossible for him, as his career-prospects would be very restricted.

In the late 1990ies, a controversy arose when there were plans to erect a memorial plate with the first part of Herzl′s quotation - the one that is somewhat flattering for Salzburg, but leaving the criticism away. After a lot of public involvement and media coverage, the memorial plate finally included all of Herzl′s comment. The affair is somewhat typically Austrian: authentic culture, historic facts and contemporary life is often sacrificed to the maintenance of the Sound-of-Music spirit dominating Salzburg to the visitor′s eye.

Not every Jew felt hostility in Salzburg. Many Jewish Austrians settled in Salzburg and actively contributed to the cultural and intellectual life of the city. The historian Adolf Altmann lived in Salzburg between 1907 and 1920 and published a "Geschichte der Juden in Stadt und Land Salzburg" (A history of the Jews in the City and Province of Salzburg).

The dramatist Max Reinhardt and poet Hugo von Hoffmannsthal were crucial figures for the founding of the Salzburg Festival and shaped it in its earliest years. The writer and pacifist Stefan Zweig, one of the most important German-writing authors of the 20th century, lived in a villa on the Kapuzinerberg. In the early 1930ies, the Zweig-Villa was a meeting point for Europe′s intelligentsia.

Persecution of Jewish culture during the Holocaust

The Jewish German dramatist Carl Zuckmayer escaped the Nazis in 1933 to Austria to live in his former holiday house in Henndorf near Salzburg. For most of these people, the Salzburg Festival and its intellectual community was a binding force, causing invaluable cultural input to the life and development of the city.

In 1938, Austria was annexed to Nazi-Germany, and Austria with a significant Jewish core had to face its darkest hour. The Jewish population in pre-war Vienna was 150,000. Shortly after the annexation, Salzburg′s synagogue was destroyed. Jewish property in Salzburg - like elsewhere in Austria - was "Aryanised", which normally meant that the Jewish owners were forced to sell all their possessions for a below-value amount.

Stefan Zweig and his wife went to Great Britain, later to South America. When they thought Europe lost to Nazi terror both committed suicide together. Zuckmayer escaped to Switzerland.

About 100,000 Jewish Austrians left the country, often leaving everything behind they had owned. About 70,000 Jewish Austrians were murdered in concentration camps. The over-all causalities of Austria during the Holocaust and Second World War made up 375,000 people, about 5.5 percent of the nation′s population. About 70 percent of them were soldiers serving in the Wehrmacht.

Learning a lesson for a brighter future

If you stroll through Salzburg with an open eye, it is likely that you will come across a reference to WWII and the Holocaust. If you tour Austria, you might even go to the former concentration camp Mauthausen. Take this part of Austrian history as a stimulation to think about the degree of cruelty that human beings can do to human beings under certain circumstances. Be different.

Salzburg′s Jewish community never recovered. Despite of many Jewish visitors that come to Salzburg as tourists, students or for other reasons, its current Jewish population consists of only about 100 people. As mentioned above, the synagogue in Lasserstraße 8 is in active use. Services are held on Jewish holidays, Friday evenings and Saturday mornings.