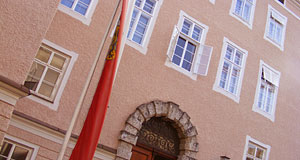 If you go along the Kajetanerkirche and the beergarden on its right hand side, you will get to the backside of the Chiemseehof (which is as good a view as you will get). This building was erected in the 13th century, but extended in re-modelled around 1300.

A chapel was added in 1355 and the building permanently extended over the course of the following centuries by purchasing neighbouring houses. After a fire in the 16th century, much of the Chiemseehof was re-built and modernised in 1694.

"Chiemsee Court" refers to Lake Chiemsee in Bavaria, a filial diocese of Salzburg for a long time. Until 1814, the building was the seat and residence of the Bishops of Chiemsee, whereas in the years after Salzburg′s secularisation the former "Prince" Archbishop - now somewhat neutered to a plain Archbishop - Augustin Gruber stayed in the Chiemseehof between 1825 and 1835.

Note the pompous security cameras and posh cars in the courtyard - today and ever since 1861, the Chiemseehof is the official building of the Salzberg Province′s regional parliament (the "Salzburger Landtag") and government ("Salzburger Landesregierung").

The medieval chapel and a gate called "Kumpfmüllertor" as well as several other smaller buildings were destructed in 1873 to meet the modern needs. More considerate renovations of the façade in interiors took place in 1967 and 1977, respectively.

http://www.planetware.com/salzburg/chiemseehof-a-s-schiem.htm
Short information on the Chiemseehof - opens in new window