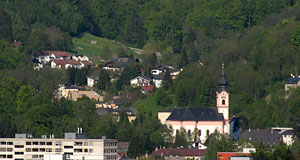 Gnigl is a district of Salzburg that used to be an independent village until well into the 20th century. Around the parish church of Gnigl you will still find houses that carry the village-personality, even though most of the neighbourhood now comprises of a mix of wealthy-suburb impressions on one hand and post-war family houses now inhabited by old people on the other.

The parish church of Pfarrkirche Gnigl lies at the heart of this area and is a lovely Baroque building. The cemetery of Gnigl - extending from the church to the Minnesheimpark - has been a burial site since Roman times. Bavarian tombs from the age of migration demonstrate that is has been a cemetery pretty much continuously since then.

History of the Gnigl Church

The Pfarrkirche Gnigl′s origins don′t go back quite that far. In 1585, a chapel was mentioned on this site. It was dedicated to St. Michael and probably of Medieval origin. In 1699, the cemetery in its current dimensions was founded. Prince Archbishop Johann Ernst Graf von Thun extended the Medieval chapel to go with the cemetery. The current Rococo church was built under the rule of Prince Archbishop Firmian. The construction started in 1731, the architect in charge was a man called Tobias Kendler.

After only one year, the construction of the Pfarrkirche Gnigl was stopped - the reasons for this interruption are unclear, they could be concerned with financial problems or the political turmoil caused by the Prince Archbishop′s decision to expel all Protestants from Salzburg.

This move led to Europe-wide outrage and criticism. The church was eventually completed in 1738 and opened in the presence of Prince Archbishop Firmian himself (and presumably in absence of any Protestant). The altar of the Pfarrkirche Gnigl was built by Sebastian Stumpfegger, a famous local mason, sculptor and artist; international tourists might come across his grave at the Friedhof St. Peter.

Note the tower with a very pretty top. A few statues of saints in the interior of Pfarrkirche Gnigl were made by Josef Anton Pfaffinger, another local sculptor. In 1852, the church became the centre of an independent parish. In 1935, Gnigl became part of Salzburg City - until then, it had been the provinces biggest town for a few years, after an economic boom triggered by the construction of the railways and local station in the late 19th century. In 1953, the tower of the church was equipped with four new bells.

Gnigl is not that exciting, but if you happen to be in the area, you might want to take the road to the Heuberg - from this hill you can enjoy a stunning view on Salzburg. Otherwise, you could walk to the Neuhauser Kunstmühle and from there follow the Alterbach creek to see various ancient mill houses. Schloss Neuhaus is younger (a palace or manor in Historicist style, based on older buildings, but essentially built in the 19th century).