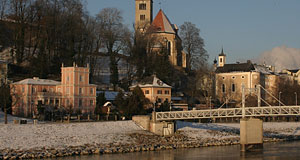 The Landespflegeanstalt Mülln is the current name and function (intensive care for old people) of the former Leprosenhaus or Leper Hospital of the city. It is situated in a Baroque house noticeable from most of the Old Town (Altstadt). The Leprosenhaus looks like a chapel associated with the mighty Müllner Stadtpfarrkirche, but in fact, it has always been a separate institution.

The chapel of the facility is known as Leprosenhauskirche; the facility is operated as a medical institution and is not open to the general public, only to visitors of patients. Since it occupies such an exposed position and often causes people to wonder what it was, we decided to include it in our "hidden treasures" section.

The Leprosenhaus can be tracked back to the 13th century, when it was mentioned as a "Sündersiechenhaus" ("poor soul′s hospital"). The leper hospital was built on the northern outskirts of the city. The building that you can currently see was built in the 17th century; it has an almost rectangular base.

The Leprosenhauskirche is a plain and simple building, dedicated to saints Hieronymus and Anthony. The painting of the main altar is a copy of the painting Maria Dorfen, a target of pilgrimages. Note that there is a picture of the Leprosenhaus included in our "Salzburg in Winter" photos.