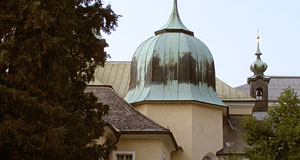 The Loretokirche or Loreto Church is attached to a nunnery in the Paris-Lodron Straße near Linzergasse, just behind St. Sebastian; it was built between 1633 and 1648. The nunnery was considered to be the strictest in Salzburg.

The Loreto Church is a plain building with one, central nave and three attached chapels. It was severely damaged at the great fire of 1818 and for a second time by bombardments during World War II in 1944. Between 1947 and 1949, the church was re-constructed according to its original appearance.

The nave has a wooden ceiling and an octagonal choir with a richly decorated altar from the 17th century. The nunnery holds a little Christ as a child statue made of ivory, the so-called "Loretokindl" ("Loreto child"). It is carried into the church at every service.

http://www.sacred-destinations.com/austria/salzburg-maria-loreto-convent-christ-child.htm
On the sacred Jesus in the nunnery - opens in new window

http://www2.salzburg.info/sehenswertes_1616.htm
On Baroque Churches in Salzburg - opens in new window