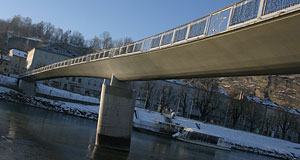 The Makartsteg is a bridge over the Salzach River in Salzburg′s city centre. It was named after the 19th century Historicist painter Hans Makart, who was born and raised in Salzburg. Makart became famous as a painter of the Viennese Historicism, providing artwork for many of the pompous buildings of the Ringstraße. The Makartsteg is open for pedestrians and cyclists only.

The current bridge is Salzburg′s most modern bridge in the city centre and already the third Makartsteg. The first one was built in 1905 in Art Nouveau (Jugendstil). It was demolished in 1967, when the second Makartsteg was built. This second one became famous as the "swinging bridge" - if you stood still at the centre, you could feel it move. Rather strongly.

We as locals that grew up in the area remember well how this caused great delight among us when we were children. The swing effect had not been intended by the architects in charge; and with some 20,000 pedestrians crossing the Makartsteg on an average day, the second bridge was soon in bad shape.

Opening of the Modern Makartsteg in 2000

The Makartsteg was demolished once again in 2000. One year later, the current bridge was opened with a massive festival: Live music along the river banks during a warm June night, fireworks and some 25,000 people cheering at the most elegant Makartbridge the city had seen so far.

On the left side of the bridge, there is the "port" of the Amadeus tourist boat. Just before the opening, a group of celebrities and a private association had suggested to name the new bridge after the physicist Christian Doppler, who was born in a house at the right side of the Salzach in 1803.

Doppler had been semi-forgotten for about a century and the 1990ies were a decade in which he was sort of re-discovered. A hospital and a school have been named after him since then and the chocolatier Fürst, inventor of the Mozartkugel, introduced a sweet in honour of Doppler. However, even though Makart also has a square named after him (Makartplatz just beyond the bridge) and even though his significance is clearly less pronounced than Doppler′s, the third bridge at the site was also a Makartsteg.

http://de.wikipedia.org/wiki/Br%C3%BCcken_Salzburgs
German Wikipedia on the Bridges of Salzburg