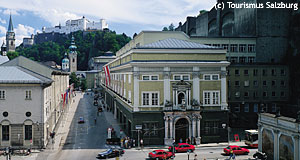 Salzburg is famous for the Salzburg Festival, which in turn is known as a specialist for concerts and opera, in particular Mozart. But where is the Salzburg Opera House? Many tourists come to the city and even if they don′t want to attend a performance, they are looking for this supposed "mother opera house" of Mozart. Alas, they don′t find anything like that. Salzburg has several venues that serve as opera houses, but none of them dates back to the times of Mozart himself.

When Mozart wrote his famous work, Salzburg was the capital of a very conservative and centralised principality. Music was performed in churches and at the court of the Prince Archbishop, not at an opera house. However, there are several places where you can follow up the opera theme.

1.) Steintheater (Rock Theatre): Let′s start in the historical order, but with an unexpected attraction. The Steintheater is a former quarry in the parks of Hellbrunn Palace, and served as a semi-natural, open-air theatre since the late 16th century. It was at the Steintheater that the first opera outside of Italy was performed in Europe. In a way, this makes the former quarry Salzburg′s oldest opera house.

2.) The Felsenreitschule: This opera and concert venue was once home to the cavalry of the Prince Archbishops. The Felsenreitschule was incorporated into the performance space of the Salzburg Festival in the late 1920ies and is a famous opera and theatre venue ever since. A unique opera house with a roof that can be removed on fair summer evenings.

3.) Haus für Mozart: The former "Kleines Festspielhaus" was re-built in 2005, when the Festival Halls were re-developed. It is used as an opera house and concert / cultural venue throughout the year, but of course mainly for the festival.

5.) Landestheater Salzburg: The official theatre of the Province of Salzburg is not internationally famous, but a nice and friendly venue for opera during the performance season. During the summer, the Landestheater serves as a performance venue for the festival, but generally for drama and not for opera. The Landestheater is a theatre, not an opera house, but has a nice repertoire in drama, opera and dance.

6.) Salzburger Marionettentheater: Don′t expect live performances of operas, but the Salzburg marionette theatre is famous for its Mozart operas. Recordings are supplemented with high-quality marionette playing. Since the marionettes features in "The Sound of Music", they are famous all over the world.

http://en.wikipedia.org/wiki/Salzburg_Festival
Wikipedia on Opera at the Salzburg Festival

http://www.salzburgerfestspiele.at/
Official Website of the Salzburg Festival with plenty of Opera