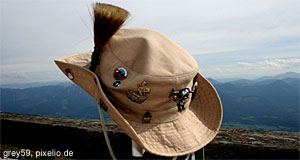 This article gives advice on off-the-beaten-track walking in Salzburg, Austria. If you want to read suggestions for walking tours that take you to the major sightseeing attractions of the city, note our article on "Salzburg in a Day" and the standard "Salzburg Itinerary".

Salzburg is a walking and hiking paradise - this applies not only to the mountains in the south of the province, but also to the city itself. Apart from the obligatory walk through the Altstadt (Old Town), we can think of a couple of routes for attractive Salzburg walking tours.

Locals make fun of walking along the ancient fortifications of the Mönchsberg as "geriatric hiking", but actually, there are several rewarding places worth noting. Among other places, you can start your hike either at the Müllner Pfarrkirche (next to the Müllner Bräu beer garden); at the Toscaninihof next to the Felsenreitschule; or at the Nonnberg for the full range of the hill. The Mönchsberg has several key-attractions.

Let′s start at the Festungsberg if you enter the area from the Nonnberg: The leaving the nunnery behind you, you will get to the Fortress Hohensalzburg. In this section, you can get wonderful views on the city centre. Move on to get to the Bürgerwehr. Behind the Bürgerwehr, you will find a network of paths that will take you to a range of attractive sports: The Museum of Modern Art (Museum der Moderne); the Richterhöhe (great view!); the Pallottinerschlössl; the Humboldtausblick (yet another great lookout) and the Kupelwieserschlössl.

There are old towers, farm houses and all sorts of artefacts one would not expect in the middle of the city. Smart people will arrange their walk in a way that they end it at Mülln, where they can then stay in the Müllnerbräu beer garden for a drink. By the way: An alternative walking route will take you to the Kapuzinerberg on the other side of the Old Town. Note that there are fewer buildings to discover on the Kapuzinerberg, but on the other hand, you can enjoy more nature.

Walking Tour with a Feminist Theme

Salzburg is considered to be a very conservative place. Nevertheless, feminism has a long-standing tradition and in order to acknowledge that, a group of locals have set up a theme-walk with commemoration plaques all over the city. The plaques highlight the lives of local women and provide a bit of information on their achievements. Here is a list of these plaques and their locations:

- Irma von Troll-Borostyani (1847-1912), a local suffragette, journalist and writer. Plaque at her birthplace, Griesgasse 4
- Barbara Thenn (1519-1579), head of the Salzburg mint, plaque at her workshop in the "Haus in der Zell", Badergässchen 2
- Rosa Hoffmann (1919-1943), communist anti-Nazi activist who was executed by the Nazis; plaque at Moserstraße 10
- Salome Alt (1568-1633), the mistress of Prince Archbishop Wolf Dietrich von Raithenau, mother of his 10 children and a rather legendary figure in Salzburg. Plaque at her birthplace in Sigmund Haffner Gasse 6
- Barbara Krafft (1764-1825), essentially a more or less unknown painter, plaque at Waagplatz 6
- Maria Johanna Sedelmaier (1811-1853), local writer of little significance; owned a tobacco store in the Ritzerbogen, where you will find the plaque
- Alex Wedding (1905-1966), author of children′s books. Plaque at her birthplace at Makartplatz 7
- Anna Berta Königsegg (1883-1948), abbess of the Order of Merciful Sisters of Saint - Vincent and anti-Nazi activist; plaque at Salzachgässchen 3
- Caroline Auguste (1792-1873) widow of Emperor Franz II HRR (Franz I of Austria) who moved to Salzburg and lived here for the last part of her life. The Salzburg Museum′s predecessor was named Carolino Augusteum Museum in her honour. Plaque is there.
- Marie Mösner (1828-1884), musician and harpist, plaque at Getreidegasse 28 of Nonnberg Convent. Plaque at Nonnberggasse 2
- Anna Mildenburg (1872-1947), singer and supporter of the Salzburg Festival. Plaque at a house where she lived between 1912 and 1922, Schloss Arenberg Palace in Arenbergstraße 8-10
- Agnes Muthspiel (1914-1966), local painter, whose workshop served as a focus of Salzburg′s post-modern art scene for many years. Plaque at her workshop and flat at Mönchsberg 9
- St. Erentrudis (8th century), Catholic Saint, sister of St. Rupert, first abbess of the nunnery - Friderike von Winternitz (1882-1971), writer and interpreter, plaque at her living place at Nonntalerhauptstraße 49
- Witches of Salzburg: Plaque at a former prison tower (Hexenturm) to commemorate anti-witchcraft persecution of the 16th and 17th century; Wolf Dietrich Straße 19 - corner of Paris Lodron Straße 16
- Adele Esinger (1844-1923) and Hermine Esinger (1852-1939); two sisters, one painter, one pianist, respectively. More famous for entertaining noteworthy guests rather than their art; plaque at Mönchsberg 6

Guide to the "Sound of Music" locations