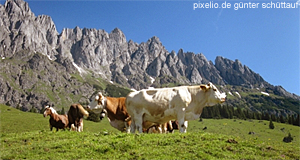 Annaberg-Lungötz is a commmunity in the Tennengau region of Salzburg, more specifically the Lammertal Valley. It has a total population of approximately 2,300. Annaberg-Lungötz is situated by the Gosaukamm mountain range and for centuries, it was considered to be part of the Pongau - until it was finally put under the administration from Hallein in the late 19th century.

Annaberg-Lungötz is known for excellent hiking opportunities in the picturesque Alpine landscape of the Gosaukamm. A dense network of hiking paths, dozens of mountain cabins (several of them serve as inns during the summer season) and the accessibility of the area make Annaberg-Lungötz highly popular among both domestic visitors and tourists.

During the winter season, Annaberg-Lungötz draws interest from skiing tourists. Skiing is less intensive than in the "famous" ski resorts in the south (Pinzgau or Pongau). The skiing area of Dachstein-West provides a second season a year for Annaberg-Lungötz and other villages in the area.

Otherwise, the economy of Annaberg-Lungötz is dominated by local service companies, agriculture and few large corporations, such as a side-branch of a wood processing company with its headquarter in Wals-Siezenheim.

In terms of sightseeing, Annaberg-Lungötz has less to offer. Look rather for the general appeal of an Alpine village in an ensemble with the appropriate landscape scenery. There is a Baroque parish church that was built in 1750 and you will find a couple of noteworthy farmhouses - not only in the village centre of Annaberg-Lungötz, but also in its periphery.