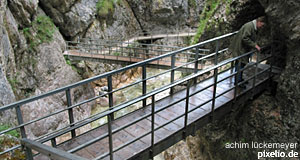 One of the favourite weekend trip destinations of the locals from Salzburg is the Glasenbachklamm just South of the city of Salzburg. "Bach" means creek and "Klamm" is an old word for canyon or gorge. The Glasenbach Canyon is a nature reserve and famous for its diverse geologic features and the richness in fossils.

The highlight of the fossil findings was an Ichthyosaur, a fishlike reptile that was found here in the Glasenbachklamm after 200 million years. Beyond that, there are innumerable seashells, shark teeth, ammonites and sea urchins preserved as fossils in the rock walls. 11 plates telling the story of the Glasenbachklamm are arranged along the wide path following the picturesque creek.

If you want to see more of the fossils or learn a bit about the local history, stop by the Heimatmuseum Glasenbach. It is in the community of Elsbethen, which is also known for the Erzherzog-Rainer-Kaserne army base and some archaeological findings in the so-called "Zigeunerloch" ("gypsy hole").

A tame but pleasant hike for all ages

This cave didn′t only serve gypsies as a shelter, but also Neolithic hunters. In the 20th century, a Neolithic grave was found at this site. The local parish church got its current Baroque appearance in 1699 and famous stucco works in 1700.

Some paintings on the ceiling by Rattersperger were added in the late 19th century. A local castle, Schloss Goldenstein, was built in the 15th century and used as a nunnery from 1878 onwards and later as a boarding school for girls.

Romy Schneider, famous for her role as Empress "Sissi", attended this school. North of the castle a Roman villa was found alongside with a number of other findings from the Roman period. Probably the best feature of Elsbethen and the Glasenbachklamm Canyon is, however, that it is really easily accessible: just hop on the Salzburg city bus; it is still covered like the city itself, no special tickets are needed!

http://www.ngw.nl/int/oos/e/elsbethe.htm
Coat of Arms of Glasenbach-Elsbethen - opens in new window