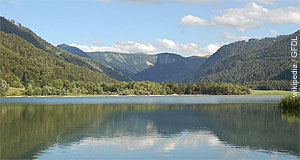 Hintersee is a village not far from Salzburg; officially, it lies in the Flachgau area, but most people would classify it to be situated in the Salzkammergut. Hintersee is mostly known for a small lake of the same name and for the skiing area of Gaißau-Hintersee.

The village has a population of only some 500 people and lacks the infrastructure of large ski resorts. The lifts are in decent shape, but there are no major hotels close to the slopes. Hintersee therefore draws mostly local people from the northern Flachgau area and from Upper Austria, who like Gaißau-Hintersee mainly for its vicinity, but also because it is cheaper than the big resorts in the south.

Hintersee has nine ski lifts, of which three are chair lifts, six are draglifts. In total, Hintersee can offer some 40 kilometres of slopes. The mountains around Hintersee belong to the Osterhorngruppe, the mountain range of which Mount Gaisberg is part of, too.

Note that nearby Faistenau also offers access to the skiing area of Gaißau-Hintersee. During the summer, Hintersee offers some good hiking paths and other opportunities for alpine sports.