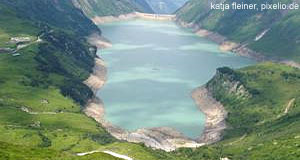 One of the most popular day-trips in Southern Salzburg, the mountainous part of the province Salzburgerland, takes visitors to the dramatic landscape around Kaprun. Here they find two large dams and water reservoirs that keep a water power plant going. The result is a very scenic piece of landscapes, shaped both by man and nature. For Austrians, the history of the Kaprun Dams is closely linked with the Nazi past of the country.

The start of the construction work of the Kaprun Dams was done in 1938, after the Nazis had announced plans for a "Tauernkraftwerk" power plant. The mountains around Kaprun offered the right conditions, yet the Nazi architects had failed to present detailed plans when the construction was already started. This did not keep anyone from pursuing the project with all the propaganda needed.

During the war, the Nazis transferred thousands of slave labourers to Kaprun who had to work on the construction site of the Kaprun Dams under very hard conditions. Despite of supply problems towards the end of the war, the first unit of the Kaprun Hauptstufe power plant "went online" in 1944.

Kaprun Dams & Reservoirs after the War

After the war had ended and the slave labourers had left, the construction of the Kaprun dams stopped. But only two years later, in 1947, it was taken up again and advanced quickly: In 1951, the 120 metre high Limberg wall was finished and one year later, the main power plant of Kaprun started to operate. In 1950, the construction of the second Kaprun Dam had started: Kaprun Oberstufe. It was finished five years later and made the ensemble complete. Kaprun Oberstufe and Hauptstufe are connected through a 12 kilometre long tunnel.

After the opening, the Kaprun power plants quickly became icons of post-war reconstruction and the victory of man over the mountains - the involvement of the Nazis was long ignored. Only in the past 20 years the official Austria has grown more aware of the contribution from slave labour, which enabled the Nazis to build the first Kaprun dam so damn quickly.

Today, the Kaprun power plants produce 700 kWh a year, which makes then an important element in Salzburg′s over-all power supply. Most of the water in the Kaprun reservoir, by the way, has come off the Pasterze glacier by Mount Großglockner. If you plan a trip to the power plants, make the town of Kaprun your starting point.

A bus takes visitors to the base camp of the Lächwand elevator, Europe′s longest diagonal outdoor elevator. It takes you from the base camp (1,209 metres) to the mountain base (1,640 metres), right trough one of Salzburg′s most dramatic mountain sceneries. From here, a bus will take you to the Wasserfallboden Reservoir and the Mooserboden Reservoir, the latter one at 2,040 metres. Guided tours take you directly to the Kaprun Dams, a visitor centre presents a modern exhibition on the geography, history and technology behind the Kaprun power plants.

http://www.zellamsee-kaprun.com/en
Official Website of the tourism council of Kaprun / Zell am See