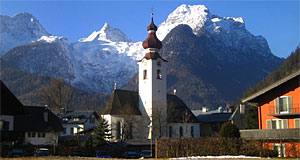 Lofer is a village in the Pinzgau area of Salzburg and a popular ski town. It is situated in the very north of the region, in the Saalachtal Valley, and is well-accessible from Salzburg via Germany. The village has a population of approximately 2,000 and more than 2,500 beds for tourists.

From Lofer, you can access three mountain ranges: The Loferer Steinberge, the Reither Steinberge and the Chiemgauer Alpen. Lofer is the most central community in the Saalachtal valley. It is well-connected to the two biggest cities in the region, Zell am See and Saalfelden. Both are within easy reach from Lofer.

The local skiing area of Loferer Alm spans altitudes between relatively low 660 metres and 1750 metres. The Loferer Alm comes with some 45 kilometres of maintained slopes and is popular among tourists as well as locals. The Loferer Alm is accessible from the village itself; two other skiing areas, the Loferer Steinplatte and the Heutal are within reach if you are somewhat flexible in terms of transport.

During the summer season, Lofer makes a good base for exploring the National Park Hohe Tauern and some hiking. If you prefer to stay local, the Saalachtal lacks the super-high mountains of the national park, but is still a very picturesque and less crowded corner of Salzburg. For both seasons, the Saalachtal in general and Lofer in particular target families.

In terms of sightseeing, Lofer has less to offer. Note the general prettiness of a typical Alpine village. The parish church was built around 1500 in late Gothic style, it has frescoes depicting a Madonna with child from around this time. Lofer also has the oldest plague column of Salzburg and one of the oldest in Austria - it was erected in 1564. The Festungsruine Pass Strub fortified a mountain pass against Bavarian and French troops in the course of the Napoleonic Wars. It was uncovered and made accessible in the 1980ies.