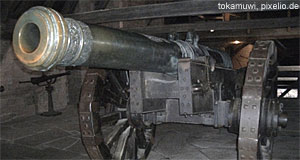 Mauterndorf Castle is in the Alps South of Salzburg and Northeast of the community Mauterndorf on a hill at the entrance to the Taurachtal Valley. It was the direct property of the Domkapitel and thereby the Prince Archbishops of Salzburg from 1253 to 1806.

In 1253, the Pope granted permission to erect a castle to protect a local toll and taxation office. First the bailey with five floors and a dungeon and a ring wall were built. This original castle was extended with a three-storey tower including a ceremonial hall. In the 14th century, further extensions and modernisation measures followed.

Frescos and coats of arms of high Salzburg officials were added between 1385 and 1396. The second ring wall was added in parallel to the first one and closed the pathway in or out of the valley completely to gain full control over the items transported on the road.

A stronghold castle in the mountains

From the second half of the 15th century to the early 16th century, several construction works were performed on Burg Mauterndorf. Both walls and bailey were extended and the "Keutschacher Zimmer" or "Keutschacher chambers" were added, notable for their elaborate wooden walls and wall paintings.

After Salzburg was secularised and decayed economically, Burg Mauterndorf Castle decayed with it. In 1894, the first renovation took place. In 1968, the Salzburg province bought the property.

Notable is the chapel of Burg Mauterndorf: it is dedicated to the Saints Heinrich, Kunigunde and Virgil and the first record of it dates back to 1339. The chapel consists of a single, long nave with Gothic wall frescos from the mid-14th century. The altar dates back to 1455 and holds statues of three saints: the Virgin Mary with her child, St. Katharina and St. Barbara.

http://www.castles.org/castles/Europe/Central_Europe/Austria/austria9.htm
Information on the castle - opens in new window