Off to Germany: Munich 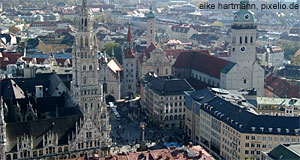 The closest really big place to Salzburg is not Vienna, but Munich, the capital of Germany′s largest province Bavaria ("Bayern"). Accessible by train from Salzburg in a bit more than an hour, it is an attractive destination even for day trips.

Munich or "München" is Germany′s third-biggest city, with 1.3 Million people living in the city itself and about 2.3 Millions in the surroundings. Approaching Munich from the South, it might be worth stopping by at the "Bavaria Filmstudios" or "Filmstadt Geiselgasteig", a somewhat provincial mini-Hollywood that displays the set of German blockbusters such as "Das Boot" and "Die Unendliche Geschichte".

The city centre of Munich is not very big and can be easily explored by walking around. To see the "Olympiastadt", the village created for the Olympic Games in 1972, you might want to take the underground. Otherwise, just stroll around and enjoy the slow pace of Bavaria′s capital.

The Mariendom in the city centre is the most characteristic landmark of Munich. Here and in the surroundings down to the station you will quickly grasp how busy and cosmopolitan Munich is under its easy-going, "slowish" surface. It is a technology and business hub often called "Silicon Munich", with many multinational companies having branches or even their headquarters here. BMW, Bayer and Siemens are among the Germany derived ones.

Among the must-dos of Munich visitors is a "Mass" in the Hofbräuhaus, the most famous brewery here in the world capital of beer - but in our opinion not as cool as the Augustinerbräu in Salzburg. Non-vegetarians are also advised to have a Weißwurst with mustard and brezl, local specialities.