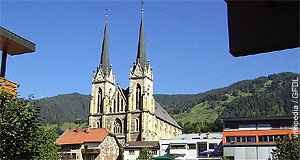 St. Johann im Pongau is a county town of the district of the same name, which corresponds with the traditional, vernacular term of Pongau. St. Johann is not only the administrative, economic and educational centre of the area, it is also a major tourism destination and popular during a short summer season for hiking, but more so during the winter season for skiing. St. Johann is situated in the Salzachtal, the main river valley of Salzburg and a member of the Salzburger Sportwelt union.

It has approximately 11,000 residents and has more of an "urban" look and feel than other communities in the wider area. This is in part also because skiing tourism developed later and to a lesser extent than in the "proper" skiing resorts. To compete with these more successfully, St. Johann developed the so-called "Alpendorf", a ghetto of hotels and tourism facilities segregated from the main town.

Like many places in the Salzachtal, St. Johann is rather commercial with several significant companies. In terms of sightseeing, we recommend that you concentrate on hiking and natural attractions. Culturally, the so-called "Pongauer Dom" (Pongau Cathedral) will be the main thing. It is of course not a cathedral at all, just a very large parish church, built in historicist style in the late 19th century. The previous church has been destroyed in a fire in 1855.

The new church was originally built with a single tower, but this tower collapsed and was re-built with a twin-tower to balance the building. Right next to the Pongauer Dom, you will see another attraction of St. Johann, the Annakapelle. This Gothic chapel was associated with the church that was destroyed in 1855. It is now used by both Catholic and Protestant communities, partly as a sign of friendship - note that the Pongau in general and St. Johann in particular were the stage for denominational struggles for centuries.

Note the Arthurstollen, a mine that is thought to be at least 1,600 years old. Parts of it are a show mine and guided tours are offered. Another "sight" or rather landmark of St. Johann is the so-called Russenfriedhof, a cemetery of Prisoners of War. In 1941, the Nazis built a POW camp in St. Johann where they kept up to 30,000 people that were forced to work.

Within the four years before the end of WWII, 3,700 soldiers died (mostly Russian POWs, which were considered racially inferior and treated worse than others). Today, there is a memorial site and the cemetery which are open to the public. On a brighter side, note the Liechtensteinklamm, a beautiful gorge in the surroundings of St. Johann.