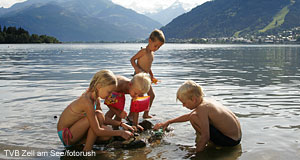 The holiday region of Zell am See - Kaprun is one of the official travel destinations of the state of Salzburg. It comprises of only two communities, obviously the two that gave the name to the region. Even individually, both Zell am See and Kaprun are very important ski and general holiday resorts; combined, the region is among the most important in Europe. 138 kilometres of slopes and modern ski facilities draw literally millions of people to the skiing area. Most slopes are concentrated around the two mountains of Schmittenhöhe and Kitzsteinhorn, as well as the Maiskogel.

In terms of summer attractions, both communities have a much longer tradition: Zell am See was a trendy spa town since the late 19th century and Kaprun earned itself a reputation for hiking and mountaineering holidays in the early 20th century. Today, the two communities make more money during the winter season and have specialised to cater for a high-end market and for families.

Sightseeing & Other Things beyond Skiing

The town centre of Zell am See and the lakeside promenade are very attractive throughout the year; it also has a convention centre and one hotel in Zell hosts the biggest annual swinger festival in Europe (no joke). Kaprun offers good hiking opportunities, a Medieval castle from the 12th century and the famous Kaprun Reservoirs and dams.

Kaprun is particularly popular because of the glacial areas of the Kitzsteinhorn; that being said, though, both towns offer more or less immediate access to ski lifts. Kaprun is more of village, whereas Zell am See has more to offer since it is an administrative centre and of more substantial size. The glaciers of the Kitzsteinhorn area remain open throughout the year, some slopes can be used for summer skiing.

Kaprun is currently developing a thermal spa and pool centre. From Zell am See / Kaprun, day-trips into the National Park Hohe Tauern are very easy; getting to Salzburg City or the attractive towns of the Inntal Valley in Tyrol is a bit more demanding, but certainly feasible even for one day only.