From Perchten to Easter eggs:
Salzburg traditions in the annual cycle 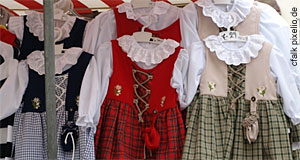 The federal province of Salzburg is dominated by agricultural land, inhabited by people that are deeply rooted in centuries old traditions and customs. Especially in remote Alpine regions of Salzburg, some remarkable customs are living traditions and fascinating expressions of ancient believes.

With this calendar of events we give you an overview of some customs and festivals in Salzburg, that you should consider to visit if you want to see some "real life" traditions beyond the average guided tour. For more information on each of these events, contact the Salzburg tourism office.

The year in Salzburg starts with the "Neujahrsschießen", the "new year′s firing". Rifle societies in historic costumes fire guns in centuries old style in the city of Salzburg and several communities in the surroundings.

In the Salzkammergut regions, "Glöckler" tour from house to house around the 5th of January. These are young men in white dress with enormous crest-hats that are illuminated from inside and bells on their belts. They perform dances to awake the seeds under the snow cover and carry the light into the winter to chase it away. This custom is based on ancient pagan believes that were later incorporated into the Christian cycle of the year.

Around the 6th of January, the "Sternsinger" ("starsingers") go from house to house. Normally played by children of the Catholic youth organisation "Jungschar", they represent the ephigany bringing blessings to the house and singing songs normally of religious themes. Today they also collect money for charity projects in third world countries.

Together with the 21st of December (see there), the 6th of January is called "Raunächte", derived from the German word of "Rauch" for smoke. They are the peak days for pagan derived traditions dealing with winter demons, fertility and the ending of the winter. Perchten are active especially in southern Bavaria, Salzburg and all of the Salzkammergut (see December).

In February, communities in the surroundings hold the traditional "Aperschnalzen": an uneven number of young men in historic costumes (Lederhosen) use whips to generate loud sounds that are meant to awake the good spirits of the spring and chase the winter away. Today, the whipping is done in a competitive manner between Salzburg and Bavaria. It takes place in towns like Wals-Siezenheim.

Mostly in February, the "Fasching" or carnival takes place, which is widely celebrated in Austria. People wear costumes and in particular children celebrate parties with great delight. Look out for parades - but don′t expect them to be too traditional, these days they tend to be just big parties with fancy dress.

Later in spring, Easter customs are held. On Palm Sunday, people carry bouquets made of seven herbs and coloured tapes and mounted on sticks to church, symbolising Christ′s arrival in Jerusalem. In families, the last person to get up on this morning is made fun of as the "Palmesel" ("palm donkey"). The bouquets receive blessings at the service and are then placed on the fields to protect them from bad weather and help to improve the crops.

Many more, mostly religious traditions are maintained at this time of the year. In some locations (such as Großgmain near Salzburg), Passion Plays and singings are held. Eggs that are laid on Green Thursday (the Thursday before Easter) are considered to be symbols for fertility. Most people stain Easter eggs on this day, that are then used to crack then on each other in competitions, a popular game for children; the egg that cracks first loses.

Church bells are not calling from Green Thursday until the resurrection service on the following Saturday ("Easter Night"). They are said to have flown to Rome - at least towards children. Minister boys compensate for the loss of noise by going from house to house and ringing "Ratschen", wooden instruments. During the Easter Night, fires are burnt - a custom based on pagan traditions.

The 23rd of April is St. George′s Day. Since he is the patron saint of horses, this day was hugely significant for farmers. In some communities a "Georgiritt" ("George′s ride") is held, with people in historic costumes riding in a procession to a service in order to honour St. George.

The night before the 1st of May is called "Philippinacht", the night of St. Philip. This apostle is the patron saint of order and so young men stroll through the villages to carry everything loose and untidy to a collection point. This custom often turns into a competition, and the next day people can get their possessions back - normally for a symbolic "fine", such as a beer or a donation.

The first of May is a bank holiday. On this day, all over Austria "Maibäume" ("may trees" or maypoles) are erected, normally supplemented with music, folk dances and fairs.

On the second Thursday after Pentecost, the Fronleichnamstag, colourful processions are held with field services. Some of them take place on water, especially by the lakes of the Salzkammergut.

Some communities in the south-eastern Lungau district celebrate Fronleichnam with "Samson" processions. In a parade, a wooden figure six metres high is carried around, accompanied by man-sized "dwarfs", musicians and historic rifle regiments. The eighty kilogram heavy Samson is carried by a single man and can be seen in Tamsweg, St. Michael, Muhr and Ramingstein on different days.

Samson is dressed in a tunica and heavy armour and holds a lance in his hand. He wears a sword in oriental style and the helmet of a warrior. The origin of this rather bizarre custom are not clear. The oldest Samson figure was reported for the first time in 1635 in Tamsweg, but presumably the tradition is a lot older and based on pagan fertility rites that incorporated giant figures.

On the 21st of June, bonfires are lit on mountaintops during the night. This is another custom based on pagan traditions, but today mostly used for BBQ′s and parties.

The 25th of July is St. Jacob′s day. The patron saint of peasants and shepherds is honoured in the community of St. Jakob am Thurn with a special dance ceremony. Another tradition of this day is the wrestling competition on the mountaintop of the 2.117 metre high Hundsstein mountain.

Held since the middle ages, young local men compete for the title "Hagmoar" in a vicious fight that is regulated by strict rules. These rules are enforced a referee, who is equipped with a horsewhip. The men fight in couples, the one who is pressed to the ground with both shoulders looses.

On Dürrnberg mountain, the miners of Hallein perform Salzburg′s oldest guild dance, the "Dürrnberger Schwerttanz" or "Dürrnberg sword dance". This dance was first reported in 1581 and until today it is performed exclusively by miners (well, employees) of the Hallein salt mines.

They dance in their traditional uniforms, with boots and swords. The latter ones serve as a symbol for the rank of a miner, not as a weapon. The dance itself displays different tasks of a miner at work. For that reason, it is performed at the light of burning torches. Guild dances of miners are also known in communities like Böckstein in the Gasteinertal valley, where the tradition was revived in 1979.

In the south-eastern Lungau district, the communities of Muhr and Zederhaus live the tradition of parading with Prangstangen. These are long poles that are densely decorated with flowers of the season. The root of this custom lies in an ore that the villagers swore: in case their valley was not suffering from a grasshopper pest, they promised to carry flower-bearing poles over their fields every year.

Today, the Prangstangen are built in weeks of intense work that involve almost the entire village. Up to 50.000 flowers such as daffodils, daisies and Enzian are collected from early June onwards to be bound to a Prangstange.

To carry a Prangstange, you have to be a local man who is unmarried - and doesn′t have illegitimate children either! After the parade, the poles are taken to the church of the village where they stay as a symbol of life until the holiday of Maria Himmelfahrt on the 15th of August. After that, the dried flowers are collected and used to smoke food.

One of the tourist′s favourites is the "Almabtrieb" in the alpine regions of Salzburg. Cows that spent the summer in the mountains are carried together, decorated with colourful bouquets, flowers and bells and guided down to the valleys where they stay in stables through the winter.

For a couple of years, the "Salzburger Bauernherbst" ("Salzburg farmer autumn") is held, a series of traditional farm markets, folk dancing and a number of other agricultural traditions all over the "Salzburger Land".

The 24th of September is Rupertitag, the day of Salzburg′s patron saint Rupert. This is celebrated with the historic rifle regiment′s "Rupertischießen" salute from the fortress. A traditional carnival fair takes place around the cathedral with food, crafts and entertainment. The peak of the fest is a procession of St. Virgil′s and St. Rupert′s relics from St. Peter′s Abbey to the cathedral. In the many centuries that this fest is held, it was cancelled only in times of great sorrow, such as during plaque epidemics or wars. The day is a public holiday for schools.

For "All Souls Night" (1st to 2nd of November), the "Gebildbrot", a special bread is baked that godparents present to their godchildren. The 11th of November is St. Martin′s day, on which little children make lanterns with a candle in them, which they carry in a procession to church.

Historically, this day was the day on which farmers were taxed - often in geese they had to give away. Today, "Martiniganseln" (Martin geese) are still eaten, for religious people this is the last feast until Christmas and the beginning of the winter lent. In the community of St. Leonhard near Grödig, a horse procession ("Leonhardiritt") is done.

During the time of Advent (the four weeks before Christmas), "Glöckler" go from house to house, in a similar fashion to how they did in January. They sing, dance and say poetry, mostly at old farmhouses.

On the day of St. Barbara (the 4th of December), the patron saint of miners, many people cut cherry branches to put them in water indoors. If they cusp and bloom and bloom by Christmas, it means good luck and success in the following year. Miners hold services with processions and dances; however, most of them are no actual miners anymore, but members of folk culture societies.

The 5th of December is the "Krampustag"; Krampus is derived from the mid-high German word for claw and the day on which young men wear devil-like masks to symbolise demons and run on the streets to whip people with cow tails or branches. There is a Krampus procession in Bad Mitterndorf and many "Perchtenläufe", similar processions, in a number of communities. One of the biggest is normally held in the community of Henndorf by the Lake Wallersee and a highlight of the season.

All over Salzburg city and province, Christmas markets are held - more or less traditional. The better ones sell mulled wine, roasted chestnuts, ornaments and crafts, mete, caramelised nuts and traditional Christmas decorations. Tackier ones sell everything that visitors might buy.

On "Maria Empfängnis", the 8th of December, pictures or statues of the virgin Mary are carried from house to house in a procession, followed by communal prayer and singing. This custom has become rather rare in recent years.

Most traditions around Christmas Eve (24th of December) and Christmas (25th) are still very much alive and mostly of religious nature. Boxing day (Stefanitag) is also a holiday in Salzburg, but co-incides with the main season - skiing and sightseeing at once - and is thus busy in most hotels.

Less religious is New Year′s Eve: it is celebrated with excessive fireworks, that might make Salzburg′s city centre rather unattractive. Thousands of locals and tourists greet the new year with fire crackers, lots of noise and campaign.