Salzburg Cycling: Where, How & Why 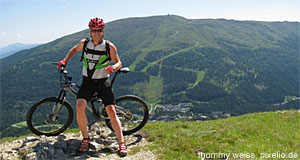 Salzburg is considered to be the cycling capital of Austria: More than 20 percent of all persona transport is done by bicycle. Just for the comparison, in Vienna, this value is at four percent. Why is that? There are several reasons: Culturally, Austria is generally a bicycle-friendly country; economically, the public transport system is relatively more expensive and less developed than in larger cities such as Vienna; and practically - here comes the main reason - the bicycle is simply the fastest mean of transport to get from one point to another in Salzburg.

This is largely due to the outlay of the city: With half a dozen of hills including cliffs, a river and ancient city centre, the place is full with one-ways and a pain in the neck to navigate through. Congestions are common especially during rush hour, the golden hour of the cyclist: Thanks to the excellent cycling path network of more than 170 kilometres, you can whiz through (or rather by) the worst traffic and instead enjoy a ride along the Salzach river.

Here you will find the widest cycling path of Salzburg, in a way the motorway of the cyclists. Speaking of one-ways before: There are more than 80 of them in the city that cyclists are allowed to go in the reverse direction - plenty of shortcut opportunities!

There are several companies that offer bicycle rental services, just ask at the tourist information service or the desk of your hotel. The latter might be the better option, since many hotels in Salzburg offer bicycles to their guests for a low fee or have discount arrangements with rental companies.

If you stay in Salzburg for a longer period of time, it is worth looking for ads at the university or in papers to buy a bicycle. In case you decide to get your own bicycle, note that the city of Salzburg offers a workshop with tools, air pumps, oil and other essentials to fix your bike - all free of charge.

Where to go: Cycling trips from Salzburg

There is a company in Salzburg that offers guided tours for cyclists. If you prefer to ride all individually, we can recommend a couple of attractive routes. The number one and must do trip is the Hellbrunner Allee, from the south of the Old Town to the Baroque leisure palace of Hellbrunn and the zoo of Salzburg. Another attractive route goes further from Hellbrunn to the Untersberg, where you can take the cable car to get up the mountain.

Following the Salzach in both directions, you can easily go from Salzburg to Hallein or to Oberndorf for a day-trip. More ambitious cyclists might want to look into the Mozartradweg, a cycling path in northern Salzburg and neighbouring Bavaria (bring your passport!) that extends over 450 kilometres. The 175 kilometres long Tauernradweg runs all along the Salzach between Oberndorf and Krimml.