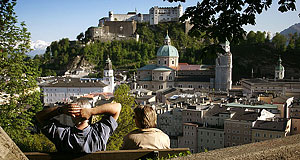 Salzburg is a city in central Europe, right in the middle of Austria - but very close to the border to Germany nonetheless. It is one of the most popular tourist attractions of Europe. Salzburg is only Austria′s third-largest city (after the capital Vienna and Graz), but in terms of economic significance, international fame and local self-confidence, Salzburg can be considered to be Austria′s "second city". Due to the vicinity to Germany as well as Italy, Salzburg has a long-standing tradition in defining itself as a genuinely "European" place.

Recently, the University of Salzburg has launched a master program in European studies; during the summer months, Salzburg has been a cosmopolitan place since the 1920ies; and the chamber of commerce (Wirtschaftskammer) maintains a contact office in Brussels, in order to keep Salzburg in touch with the brain of Europe. By its own claim, the Salzburg Festival is Europe′s largest annual event for opera, concerts and drama and draws visitors from all over the world.

Austria joined the European Union in 1995; since then, the national currency was given up for Europe′s Euro, the border controls to nearby Germany stopped and the regional and European identity has become much more important especially for the younger generation. The universities have become a lot more international, and the areas of Bavaria that were close to Salzburg have effectively become suburbs of Salzburg with lots of commuters living there. Appropriately for this development, the largest shopping mall of Salzburg was called "Europark".

Within Europe, Salzburg has found its place: It is one of the most popular tourist destinations of the continent, surpassed only by a bunch of Italian cities. Not all locals are happy with the direction that Europe has taken. Austria is one of the most Europe-sceptic EU member states and Salzburg has a pronounced right-wing tradition. Especially elderly people are often far from being enthusiastic when it comes to defining Salzburg as a city in Europe rather than in Austria.

One final word: Many non-Europeans view Austria as an Eastern European country. Whilst this is true both geographically and culturally for Eastern Austria, it is not quite true historically if you define "Eastern European" the Austrian way. For Austrians, Eastern Europe are the former Soviet Republics, including some regions West of Vienna (such as most of the Czech Republic), but clearly excluding Austria. Salzburg is culturally closely related to Bavaria and many locals might find it offensive if you call them Eastern Europeans - this is where the conservative attitude of many locals comes out again. If in doubt, just call them Europeans from Salzburg and everything will be fine.

http://europeforvisitors.com/europe/articles/salzburg.htm
Europe for Visitors  on Salzburg


back to "general info"