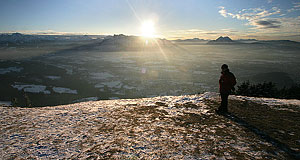 Salzburg is a city in central Austria, directly at the border to Germany (or the German province of Bavaria, to be more precise). Salzburg shares large parts of its history with Bavaria and has an interesting, somewhat ambivalent relationship with its big neighbour.

Culturally, Salzburg shares more features with Bavaria than with Eastern Austria - this concerns accent, literature, cuisine and much of the local pop culture. However, like most Austrians, the people of Salzburg can get very passionate about pointing out that they are anything - but not German. Whilst this might be easy to argue for in Eastern Austria, in the case of Salzburg it is more difficult.

Historically, Salzburg belonged to the Bavarian heartlands a long time before Germany was created: The Dukes of Bavaria ruled over this area since 600 A.D. Salzburg became their principal diocese after the first Bishop, St. Rupert, had been sent there from Worms. During the Middle Ages, Salzburg prospered and developed increasing autonomy. Finally, it ceded from Bavaria in the 14th century. Since then, Salzburg was an independent principality and church-state within the German Empire, not to be confused with modern Germany.

In the course of the Napoleonic Wars, Salzburg was looted by French and Bavarian troops in 1806. It lost its independence and became part of Bavaria again - which was still not part of a unified Germany, which did not come into existence until 1871. At the Vienna Congress, Salzburg became part of Habsburg Austria; which was not a very popular decision in Salzburg itself. The people of Salzburg considered the Habsburg Empire a foreign power and with its many nations and distant capital Vienna, it must have seemed rather intimidating. Certainly more than the culturally more similar Bavaria, not to mention a re-establishment of Salzburg′s independence.

Once Germany was founded as a unified federal state in 1871, Salzburg had recovered from the Napoleonic Wars both in terms of economy and self-confidence. German nationalism flourished, in Germany as well as in the Habsburg Empire. The people of Salzburg still remembered their origins in Bavaria, which was now part of Germany.

Salzburg became a backbone of German nationalism. There is the anecdote of a group of nationalists who met at an inn that had covered its beer garden with earth from Bavaria - so that guests could dine on German soil. World War I temporarily unified Austria, but once the vast Empire collapsed and turned into a dwarfed, German-speaking stretch of land, German nationalism saw its renaissance.

Once again, Salzburg became a hotbed for German nationalism and a retreat for people who lobbied for an Anschluss (joining Germany as a federal state). Once Hitler seized power in Germany, he immediately started to put pressure on Austria to join the Third Reich that Germany had turned into. Terrorists and underground guerrilla warfare was one mean to push Austria, and Salzburg was the first target. Many people from the Salzburg area joined the Nazi party even when it was still illegal in Austria.

Once Germany (with Austria) lost WWII, Austria defined its national identity in a manner of (illicit) "we didn′t do it". The Austrians sort of drew the identity line by dissociated themselves from the Germans. This worked rather well and was supported by the allied forces, who wanted to preserve their influence in Central Europe. Salzburg, which was occupied by US troops, underwent a half-hearted de-Nazification procedure and continued business as usual.

Since Austria joined the EU, the areas have merged more and more again. Today, there are no border controls between Salzburg and Germany; many people who live in Freilassing and its surroundings commute to Salzburg. The relationship between Salzburg and Germany is friendly; nevertheless, especially foreigners might want to avoid discussions to what extent people from Salzburg should be considered to be a variation of Germans.

In a way, they are - in others, they are not. It is a sensitive issue that even people that are very familiar with Austrian history and culture might find hard to decide, so we don′t really recommend it as a small talk topic for people who lack detailed insights into these subjects.

http://en.wikipedia.org/wiki/Salzburg,_Germany
Wikipedia on Salzburg in Germany