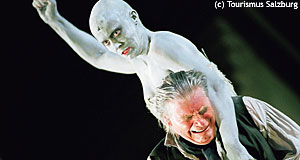 Salzburg has several theatres, of which the Salzburger Landestheater is the biggest - sort of the "official" theatre of the province of Salzburg. It comes with two stages, the main one and the Kammerspiele. The Schauspielhaus Salzburg is the former Elisabethbühne in the Petersbrunnhof and specialised in more avant-garde productions than the Landestheater.

The Kleines Theater is a smaller stage beyond the Linzergasse and finally borderline-subculture, but also does performances for children and features stand-up comedians. The Toihaus is finally beyond the border to sub-culture and is a lovely independent backdoor stage opposite Mirabell Palace.

Note also the Marionettentheater, the theatre of marionettes - it specialises on performances on Mozart operas, but recently developed a more commercial touch. The lowest point of this development was reached when the marionettes started to perform "The Sound of Music". All other theatres named above are actually not touristy at all and thus perform almost exclusively in German. Exceptions are opera productions in the Landestheater.

For literature, note the little museum and archive in the birthplace of Georg Trakl, run in his honour. There is a Stefan Zweig library and archive in the Edmundsburg. Zweig lived in the Paschinger Schlössel right next to the Kapuzinerkloster. Other recent writers and playwrights that have lived in Salzburg have concentrated around the scene of the Salzburg Festival. Note for example Max Reinhart or Hugo von Hoffmannstal. The former lived in the palace of Schloss Leopoldskron.

The Note also the Literaturhaus, Salzburg′s centre for literature and cultural events dealing with this subject. Note also that in addition to Stefan Zweig and Georg Trakl, other important Austrian writers have lived in Salzburg. Thomas Bernhard, for example, who once said that all of Austria was one large stage. Keep this in mind when you are looking for a theatre. Peter Handke lived in a house on the Mönchsberg once. Both Handke and Bernhard had close links with Salzburg in the second half of the 20th century, but Salzburg′s literature traces can be found much earlier than this.

The monastery of St. Peter was once (aka in the Middle Ages) home to one of the world′s most important scriptoriums, the leading producer of illuminations in central Europe. And the "Mönch von Salzburg" or "Salzburg monk" was an anonymous minnesingers and poet who lived here in the late 14th century. About half of 100-odd songs that are preserved are of romantic connotation, which has nourished speculations that the mysterious "monk" was actually Prince Archbishop Pilgram II von Puchheim.