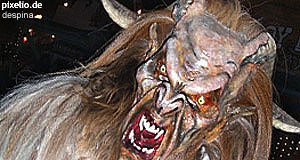 In Salzburg people always minded their ancient customs and good old traditions. Especially in the countless mountain villages spread all over Salzburg, which are difficult to access, some of these quite old customs and traditions survived through the centuries until today. One of them is the originally heathenish customs of the Perchten.

According to old public opinion plenty of ghosts and demons are going around during the long and cold nights in mid-winter. In Salzburg, during this time of the year, the deep rooted belief in the Perchten was overall widespread. The origins of this belief are probably domiciled in various Germanic traditions based on female divinity. In the view of our ancestors Frau Perchta (Ms. Perchta) was a demonic creator, half god, half man, who appears at the end of the old year / beginning of the New Year, accompanied by various evil figures. She watched over the people and protected them against bad demons and also metes out punishment.

In the 16th century her name was also given to the evil creatures accompanying her and young athletic men wrapped in grim, fearsome and awful masks moved out from house to house to banish the bad demons and ghosts. During the 17th and 18th century the Catholic Church tried to ban the heathenish Perchten customs, but with little success: in the 19th century the Perchtenläufe (Procession/ pandemonium of the Perchten through the villages) became popular again. During the centuries, Perchtenläufe took place all over the mountain dales of Salzburg, but although the customs are nowadays popular again, the original customs only survived in Gastein, Altenmarkt and St. Johann.

The masks are made of wood and mostly have animal archetypes (wolf, bear, eagle,…). They all have enormous fangs and tusks and various pairs of horns to spike several dammed souls. In some mountain dales like Gastein they also have no ears, so they needn′t hear the painful screams of their victims.

The horse tail is also a symbol of the Perchten - they are used for punishment. The big bells they wear on their back are very noisy and announce them from the distance.

There are numerous Perchten customs in Salzburg and other predominantly mountain regions in Austria. One of the most known are the processions of the Schiachperchten (ugly Perchten), who are described above but there are also various customs of Schönperchten (beautiful Perchten). While the Schiachperchten have to ban demons and ghosts, the Schönperchten are responsible for banning mischief and bringing luck and wealth to the people.

The best known of them are the Tresterer (Pinzgau region), the Schnabelperchten (Rauris) the wild chase (around the Untersberg) and also the custom of the Glöckler (Salzkammergut). They are also wearing big masks based on heathenish symbols and animal archetypes and according to our ancestors′ belief they bring light in the dark season and promise large crop, fortune and blessing to the people.

Traditionally on December 5th and 6th St. Nicolaus walks from house to house in the cities and villages to admonish and laud young and old. He is mostly accompanied by a Krampus (also an evil creature), who is going to punish the bad children and adults on St. Nicolaus′ command. For the honest children he normally has little presents.

St. Nicolaus himself is a Christian figure, more precisely the former bishop of Myra. As son of a well situated family he started to help poor people who lived in deep poverty. He was supposed to have miraculous vigour and so he became patron of the seamen, children and poor people.

The figure of the Krampus is also based on a heathenish custom. Similar to the Perchten the Krampusse had the function to ban the bad ghosts of the winter to help the people fighting against their fears. Originally the custom of the Krampus was spread over all of Austria but was forbidden by the Catholic Church during the inquisition. It was prohibited by death to masquerade as a devil or an evil creature and so this custom only survived in some hardly accessible, remote regions of the Alps from where it slowly spread over especially the western parts of Austria again. Today the Krampusse became slowly turned into Perchten and it′s going harder and harder to define the boundary.

Perchtenläufe as touristy events: Where & When

The Perchtenläufe are originally constricted to four nights in the year - the four Rauhnächte. These nights are the Thomas Night (December 21), the Christ Night (December 24) the night before Silvester (New Year′s Eve) and the night before the day of the three magi (January 5). In the Pongau region every year great Perchten processions with Schönperchten and Schiachperchten take place. The biggest ones are in Gastein, Altenmarkt, St. Johann and Bischofshofen.

Because of the growing popularity of the Perchtenläufe these events spread all over Salzburg and most of the big events are now scheduled around the 5th and 6th of December where you can see the Perchten in Henndorf, Oberndorf, Neumarkt, Maxglan and of course at the Salzburger Christkindlmarkt am Domplatz to name some of the biggest ones.