The place formerly known as Salzberg 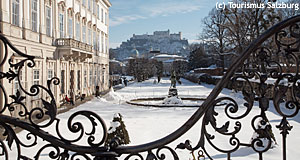 Bochnia is a town in south-east Poland with a total population of about 30,000 residents. It is situated about 40 kilometres East of Warsaw. The former, German name of Bochnia is Salzberg, which might be pronounced in a similar way to the Austria city.

The first settlers arrived in Bochnia in 1198. In 1248, salt was discovered and the first mines were built to exploit the white gold. This led to a quick development of the city and only five years later, the city received town privileges in 1253. The salt mines are also the reason for the German name of the place: "Salzberg" means "saltmountain".

In the following centuries, Bochnia developed a strong economy based mostly on the salt trade business, but also in cloth making. Between 1655 and 1657, the city was severely damaged by Swedish troops. In 1772, Bochnia was taken under Russian rule, but went to Austria over the course of the "first Polish division" in the same year.

As Salzberg, it was connected to the developing railway system in 1856. Other modernisations followed: in 1886, the first public library opened; in 1913 a cinema was founded. Only in 1909, private houses of the city received a sewage system.

During World War I, the city was involved in fights between the Austrian and the Russian army. Over the course of this fighting, Russion troops plundered Salzberg and killed several civilians.

During World War II, the Polish resistance organisation "Orzel Bialy" ("White Eagle") attacked a Nazi police post in 1939. Two German policemen were killed, including the commander of the post.

Two Polish men were executed in response the following day, hung on a street lamppost. However, 52 more people were shot only briefly after the initial hangings. These executions were the first killings by Nazis on Polish soil and were followed by the deportation of many residents of Bochnia to concentration camps. The resistance movement remained active in the surroundings of the city.

The German name Salzberg is purely historic and not used anymore. The city prides itself for having one of the World′s oldest salt mines that are still in use. Bochnia′s historic town centre, the mine and a Jewish cemetery attract many tourists.

Bochnia can be easily reached from Warsaw, which is probably the main reason for its popularity. Also, it is not related to Salzb- U -rg in Austria, which is pronounced and spelled differently, but keeps getting confused with the Polish place.

If you wonder why it appears on this website, despite of otherwise being dedicated exclusively to the city in Austria: this is simply due to you, dear user, and the unusually high number of requests by mistake for an "e" instead of a "u". However, we hope you will enjoy the information provided here! The rest of this website is dedicated to the Austrian branch.