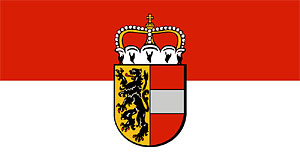 Salzburg is the capital of an Austrian province (Bundesland) of the same name; to make the discrimination easier, the province is sometimes called "Salzburgerland". As an official province which has enjoyed centuries of political independence - and thus, has a long tradition in heraldry. Modern Salzburg has a flag and a coat of arms.

The flag of Salzburg is red and white, the traditional colours of Salzburg. For official occasions, this flag is used with a variation that has elements of Salzburg′s coat of arms at its centre: The crown of a prince of the Holy Roman Empire. You will have plenty of opportunities to look at this symbol in Salzburg: It is part of plates on every car that is registered in the province.

Some Details on the Salzburg Flag

The current crown was added to the coat of arms and Salzburg flag only when the principality fell under Habsburg rule in 1816. The other elements of the flag date back to the late 13th or early 14th century. The arms were formally adopted again by provincial laws in 1920.

There is no formal difference between the simple red-white flag and the red-white Salzburg flag with the coat of arms. The latter one is more official and used by the province′s administration. However, even private individuals are allowed to use either version of the Salzburg flag. This is on contrast to the official flag of Austria with the national eagle, which only government organisations and the military are allowed to use.

http://www.civicheraldry.com/page/18685
Coat of Arms and Heraldry of Salzburg City