Salzburg Sights: Attractions of the Province 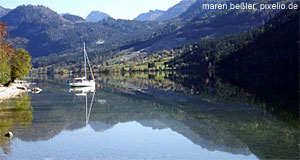 Note: This article is on sights from the province of Salzburg. For attractions in the city of Salzburg, see our other article on "Salzburg Attractions".

Austria is a touristy country and Salzburg a particularly touristy corner within it. The sights and popular places of Salzburg are diverse and manifold: The city of Salzburg is famous for its Baroque architecture, the Salzburg Festival, Mozart and "The Sound of Music". It is a year-round sight full of international visitors pretty much at any time.

The area of the Salzkammergut is popular for day-trips, sights there include some "Sound of Music" filming locations. The Salzburg Lakes are popular among Germans - they are no sights in the strict sense of the word, but attractive during the summer.

The mountainous areas finally provide Salzburg with the biggest share of tourism potential: Several of the country′s most popular ski towns can be found in the Pongau and Pinzgau areas; skiing regions in the Tennengau and Lungau are popular among families. During the summer, hiking in the National Park Hohe Tauern and Austria′s second most popular sight after the Imperial Palace in Vienna, the Großglockner Hochalpenstraße, draws the crowds.

Every year, the national bureau of statistics assesses the tourism industry in Austria. In its annual report, many towns of Salzburg appear among the most popular (and thus most crowded). In the following table, you can see the main sights of the province - a ranking of Salzburg communities according to number of tourists that stayed there in 2007.

The Statistik Austria, who published this account, measures this value in the number of sold over-night arrangements (the number in the second column). All of the following 20 communities were among Austria′s top-100 tourist destinations.