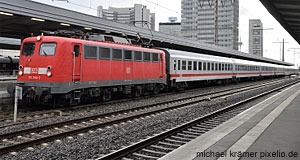 The central train station of Salzburg (Hauptbahnhof in German) is the most important arrival point of the city: Even those who arrive on the airport often go to the city centre by bus via the station, in addition to the many independently travelling visitors who come or leave by train. The train station of Salzburg is located in the northern part of the city. Many of the main bus lines stop there, both city busses and busses to the surroundings of Salzburg. City busses depart right in front of the station, several lines go via the city centre.

In addition, you will find a taxi stand right in front of the train station main building, as well as the other essential facilities: A cash machine, an office of the tourist information centre, lockers (ground floor, just follow the signs) and fast food restaurants. Not to mention the toilets - but try to use those on the trains before your arrival, the ones at the station charge a fee.

The train station is about 15 to 20 minutes walking distance to the city centre (Old Town) of Salzburg. This is probably a tad too far to carry heavy luggage, in which case you can choose between bus or taxi. For the former, read our article on the public transportation in Salzburg for advice on how to get the least expensive deal. Busses to the surroundings of the city and to Bavaria depart from a separate platform array. In the central hall of the station, you will find a bank, a travel agent and train information services (not to be confused with the tourist information centre, which is at the platforms).

A few facts and figures on the central train station: It was opened in 1860 as a major station of the Austrian-Hungarian railway network; after severe damages during WWII, provisory installations kept the thing together for decades, whilst the national railway company, the city of Salzburg and local residents argued about a final re-development of it.

The square in front of the train station as well as the underground arrival platforms for local trains was built in 1996. As of 2009, the station is finally re-developed pretty much from scratch - by then, it was probably Austria′s least appealing train station for years. The modernisation will be completed in 2010. New office buildings and modern shopping malls opened in the immediate surroundings of the train station in recent years.

The general appeal of the neighbourhood has increased dramatically through that, but is still far from being nice. There are still lots of bums, punks and dodgy people out. Nevertheless, apart from pickpockets there is no reason to be scared of the train station or its surroundings. A police office is at one of the platforms directly at the train station building.

On the area around the train station of Salzburg

http://www.oebb.at/pv/en/Travelling_to_the_Austrian_Federal_States/Salzburg/
Sub-site of the train station in Salzburg