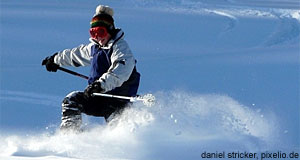 Austria in wintertime means primarily one thing: skiing. Long gone are the days of rustic "Gemütlichkeit" in the Alps. In the past 50 years, the lazy villages in the Austrian mountains and valleys have been transformed by an industry ready to serve millions of alp-ficionados. Finding the real deal can be tricky - however, we try to give you some advice how.

Before you plan your skiing holiday in Austria, you need to ask yourself what your expectations are: Are you keen on a party-scene, lots of young people and exciting nightlife under the label of "apres-ski"? Are you more interested in technically challenging slopes, dramatic scenery and powder-like snow? Are you travelling with a family that might require easier slopes and nearby spas for a daytrip into hot springs? Once you end up with a definite idea, look up the websites of local tourist offices and check whether the region is appropriate for your needs. Give them a call to double-check before you book your arrangement - they are normally really friendly and helpful people.

In terms of the region, the Alps of Austria come in three main chains: The Nördliche Kalkalpen ("Northern Calciferious Alps"), the Südliche Kalkalpen ("Southern Calciferious Alps") and the Hochalpen ("High Alps") sandwiched in between. All in all, the mountains in Austria are not as high as they might be in Switzerland or Western Italy. However, the snow situation is often better, as snowfalls tend to be stronger in the East of the Alps. The most popular skiing destinations are in the Northern Kalkalpen of Tyrol and Salzburg; they include towns like Lech, St. Anton and Kitzbühel.

The Hochalpen offer more challenging slopes, less party life, but access to family-friendly spas and hot springs. Good places are Innsbruck, Sölden and Obergurgel in Tyrol and the South of Salzburg with Zell am See, Gastein and Kaprun. The Southern Kalkalpen are generally more remote and popular with locals from Carinthia. Here you are more likely to find natural serenity than in the North, but the slopes might be less exciting.

Another aspect is the timing; the high season is more crowded and expensive, but generally also almost guaranteed to come with good snow conditions. The low season is cheaper and less busy, but you should check whether the snow allows good skiing. The high season is generally between Christmas and New Year′s Eve, when many Austrians join the tourists, and from late January to late March. Low season runs in good years from as early as early November until Christmas, the early weeks of January and - again only in good years - from late March until end of April.

The nice thing about the Austrian skiing resorts is, that they offer a lot for many tastes. The not-so-nice thing is, that there are rarely any unspoilt valleys left, little remoteness to be explored, few villages that don′t pimp out the very last shed for the sake of some extra cash. This has several reasons: value for money is good again in Austria, as prices have risen in Slovenia, Italy and other popular skiing areas. The Austrian Alps can be easily accessed by car or train. And there is a longstanding tradition of skiing in this little country, with the recent successes of local heroes like Hermann Mayer adding only another icon to the hall of fame worshipped by the nation′s ski enthusiasts.

History of Skiing in the Alps

Skiing dates back to days before the war. What was a somewhat bizarre hobby for some crazy individuals (surely the winters were long these days, so why not binding two boards of wood to your feet and sliding down a mountain?), was transformed into modern skiing by pioneers like Hannes Schneider. The Austrian from the Arlberg region modelled his style of skiing after a snowplow ("Schneepflug"), going downhill with his skis in a V-formation. Thereby, he kept control about his speed, direction and momentum with higher precision than skiers before him. Hannes Schneider also helped organising the first race in Austria, the Arlberg-Kandahar.

Schneider was later imprisoned by the Nazis, left Austria after the war and started a skiing school in the United States. Thereby, he helped to propagate the sport on a global scale. Others followed and the international jetset discovered the sleepy villages of Tyrol, Salzburg and Carinthia. Places like Kitzbühel became increasingly popular in the 1950ies and the decades that followed. Today, entire valleys are full of chalets and large hotels that are often empty during the summer. The ecological impact of mass skiing became particularly dramatic in the 1970ies and 1980ies.

It coincided with an increasing awareness of environmental issues, though, and measures to preserve the Alpine beauty of Austria are now more strictly regulating the use of the mountains for mass tourism. Think of this next time you are squeezed into a cabin full of drunk Dutch, German and British tourists, ripped-off by greedy landlords and fully unaware of the serenity the same mountain has during the summer.

http://www.austria.info/
More on Skiing in Austria

http://www.tourmycountry.com/
The ultimate site on Austria - with skiing information

http://teachski.com/
More on Hannes Schneider, the father of Austrian skiing