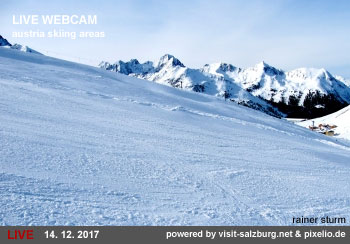 There are several webcam services available that specialise on snow reports and live images from skiing areas in Austria. Several of them operate webcams in the ski ressorts of Salzburg, of which Maria Alm is among the most important. This article highlights some "snow cams" from Maria Alm and its immediate surroundings that we found particularly useful.

Webcams in & near Maria Alm

Various Webcams from Maria Alm: Feratel is a tourism media company that offers and maintains web cameras in various locations in Austria; from the page linked here, you get to the cams for Wagrain.

Bergfex Maria Alm Webcams: The website bergfex is a travel site dedicated to the Alps and mountainous activities. This link takes you to their overview on webcams from Maria Alm and surroundings; much of this overlaps with the webcams presented in the links above, but there are one or two exceptions.

Hochkönig (Dienten, Maria Alm, Mühlbach): Nicely done page with web cams straight from the skiing area of Hochkönig, with some on Maria Alm. Covers all three areas of the ski region.

Maria Alm Webcam by Ski Amade: The town of Maria Alm is part of the Ski Amade region, an association of ski ressorts in central Salzburg and surroundings. On its website, Ski Amade offers this Maria Alm webcam with a view on the slopes.