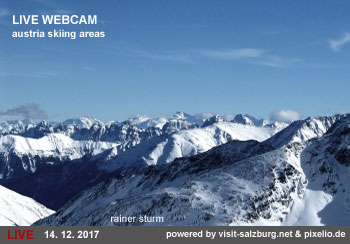 There are several webcam services available that specialise on snow reports and live images from skiing areas in Austria. Several of them operate webcams in the ski ressorts of Salzburg, of which Obertauern is among the most important. This article highlights some "snow cams" from Obertauern and its immediate surroundings that we found particularly useful.

Webcams in & near Obertauern

Various Webcams from Obertauern: Feratel is a tourism media company that offers and maintains web cameras in various locations in Austria; from the page linked here, you get to the cams for Obertauern. In addition, there is some interesting and concise English information on Obertauern added to the webcam image. A page that is well worth noting.

Obertauern Web Cams: The Tauernrunde slope network of Obertauern extends between Pongau and Lungau. Here are live images from the region, various web cams of Obertauern accessible from a single page. Well done.

Webcams from Obertauern: Bergfex is a travel company that specialises on the Austrian Alps. On the page linked here, they show a large array of Obertauern webcams, mostly maintained by hotels from Obertauern and surroundings. Nicely arranged, we liked the layout.

Obertauern Ski Lift Webcams: The ski lift company of Obertauern operates a set of webcams that focus (quite literally) on slopes and lifts in and around Obertauern. Nicely arranged and conveniently presented.

View on Obertauern: Presented by Panoramablick, this page shows a webcam that is operated by a hotel from Obertauern. Simple, but at least featuring a different webcam than most of the other directories.