Climate & When to go 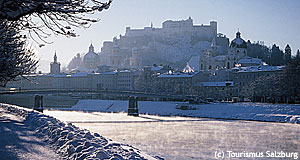 Salzburg is at the Northern edge of the Alps and has a typical Central European climate with hot summers (up to almost 40 degrees Celsius) and cold winters (down to minus 20 degrees Celsius). However, most of the year Salzburg has moderate weather conditions and should not keep you from planning your trip at pretty much anytime.

A different story are the tourism seasons. Crowds peak around July and August, when the Salzburg Festival is held and the summer shows his brightest side. Another top-season is December with the Christmas markets. Both periods are both scenic and pleasant, however, be warned of the masses of tourists and rip-off prices.

For more quite times with low prices (especially airfares) look for spring, early summer and autumn (September/October). For any time of the year, bring clothing suitable for rain and be warned of the...

"Rain in strings" - that′s what "Schnürlregen" means and it is considered to be a typical Salzburg thing. Being on the Northern edge of the Alps, Salzburg comprises 1350 mm of annual rainfall. No matter how much or little that sounds: it rains a lot. For detailed information, see our article on Salzburg's weather.

Climate and weather research is - not surprisingly - quite a big deal in Salzburg. Measurements are done since 1874, making the city of Mozart also one of the oldest spots for ongoing meteorological research in Central Europe. The "Salzburger Stadtverein", the city′s society, maintains a "Wetterhäuschen", a "weather hut" for measurements on the Alte Markt square. It was built in 1888 and is of historic and architectural interest, so don′t walk by.

Another consequence of the rain is the emphasis of Salzburg′s traditional costumes on their ability to stand the test of a harsh climate. The so-called "Loden" fabric is made into all sorts of coats and jackets and has been made for centuries. Salzburg′s oldest shop specialising on rain-clothing and umbrellas was founded in 1544 (much like Salzburg′s oldest brothel, by the way).

http://www.cia.gov/cia/publications/factbook/geos/au.html
CIA fact book on Austria, including information on the climate - opens in new window

http://www.bbc.co.uk/weather/5day.shtml?world=0138&links
Weather for Salzburg on the BBC - opens in new window