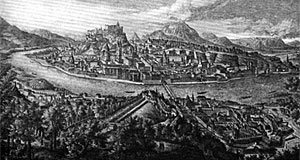 Salzburg′s long history can be traced back to the stone age - but only in the Middle Ages and more so in Baroque times it got really exciting! Here you will find a timeline with the most outstanding key events. Maybe you would also be interested in browsing the list of the Prince Archbishops.

The first signs of settlements within today′s city limits date as far back as to Neolithic times. However, the first actual city that merged smaller Celtic communities was founded by Romans in 15 BC and named Iuvavum. After the Roman Empire came to decay, Iuvavum was abandoned and fell into ruins.

A monastery is documented from the 5th century, but it wasn′t until St. Rupert received the ruins as a present in 699 AD from the Duke of Bavaria that the city went uphill. Rupert became the city′s bishop, launched St. Peter′s Abbey and is until today the patron saint of Salzburg.

The name Salzburg is documented since 755 AD. In 1077, work on the Fortress started. In 1166 a dispute between the archbishop of Salzburg and the German Emperor Barbarossa peaked in an arson that destroyed most of the city.

During the 14th century about one third of the population dies through the plague. At the same time, the province of Salzburg finally becomes independent from Bavaria and is an entity within the Holy Roman Empire of the German Nation.

In 1492 the Stiegl brewery is founded, still one of Salzburg′s top-attractions. The same year, Jews are expelled from the city. Only a few years later, social unrest and the preludes of the reformation spark riots among peasants. Salzburg is occupied during the Bauerkriege and the Fortress besieged for three months in 1525, before the rioters are finally pacified.

During the 17th and 18th century Salzburg goes through its prime: the Prince Archbishops Wolf Dietrich von Raitenau, Markus Sittikus and Paris Lodron use the wealth from the salt trade to transform Salzburg into one of the world′s most outstanding baroque city with magnificent palaces, churches and gardens.

In 1756 Salzburg′s most famous son is born: Wolfgang Amadeus Mozart.

After 1803 the Prince Archbishops lose their secular power in the course of the Napoleonic wars, and Salzburg becomes part of different provinces before it is finally finding its way into the Austrian Empire. There it remains rather quietly, only slowly recovering during the 19th century from the French and Bavarian lootings.

In 1816, Salzburg becomes part of Austria, but does not recover economically nor culturally until towards the end of the 19th century. Slowly the city gets rid of old fortifications and some new districts arise around the station, built in neo-Classicist style so typical for the Austro-Hungarian Empire.

After World War I the Austrian Empire splits. Salzburg Festival is founded in 1920. Salzburg becomes a fashionable place to be in the summer and attracts wealthy people and intellectuals from Vienna and Germany, mostly through the young Salzburg Festival. However, the First Republic is politically and economically instable and in 1938 all of Austria becomes part of Nazi Germany. In the same year, book burnings are held on public square Residenzplatz, persecutions of Jews and other Nazi-victims start. In November, a synagogue is destroyed.

During World War II, a total of 15 air strikes destroy 46 percent of the city′s buildings especially around the station. Up to the present day, duds and bombshells are occasionally found in Salzburg. Watch out for some of Salzburg′s not-so-nice neighbourhoods around the station area: they are some of the scars of WWII.

After the war Salzburg is occupied by US troops. Great endeavours of the population as well as support trough the Marshall European Recovery Program lead to a rapid recovery of the City after the war. In the 1960ies, the University of Salzburg is re-established as a full academic institution.

The city is slowly, but steadily growing and benefits from its close ties to Germany and - since the end of communism in Austria′s eastern neighbours after 1989 - from its historic ties with Eastern Europe. In 1995 Austria joins the European Union.

In 1997 the city of Salzburg becomes a UNESCO World Cultural Heritage site to honour its unique baroque structure. Today, Salzburg is the pearl of Austria: rich in culture, cuisine and natural beauty, but also prosperous and diverse, it looks into a shiny future.

http://www.salzburg.gv.at/en/en-index
More general information on the city and province of Salzburg - opens in new window