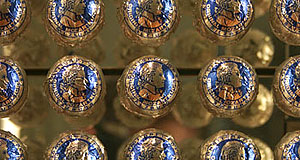 The Mozartkugel is a delicious sweet that originates from Salzburg. It contains a core of pistachio, marzipan and nougat and is coated in dark or milk chocolate. The original Salzburg Mozartkugel was invented by the chocolatier Fürst in the 19th century. There are still several branches of this chocolatier in Salzburg; beyond that, there are several other brands of Mozartkugeln available and all classes of quality and prices.

We advise you generally to be careful with where you buy - markets and souvenir shops in touristy areas are generally horribly expensive. However, one thing is sure: You HAVE to buy some Mozartkugeln! Without that, you haven′t been to Salzburg. One of the high-quality producers of sweets and chocolate from Salzburg′s surroundings is - alongside with the previously named inventor Fürst - the brand "Reber".

This company from nearby Bad Reichenhall specialises on high-end chocolates and bonbons and makes some of the best Mozartkugeln on the market. They sell some of their goods online vis amazon.

Decent quality at a medium price would be Mirabell, a local company from Salzburg. Mirabell is from Salzburg and produces locally. It is by far the biggest producer of Mozartkugeln in the city and most Mozartkugeln you will see on offer in souvenir shops will be of this brand. In addition, Mirabell does several other sweets in Mozart-style. Prices range widely, we urge you to get Mirabell Mozartkugeln in supermarkets (Billa or Spar, for example).

In addition, there are several "discount brands" that you will find in any supermarket in Salzburg or elsewhere in Austria. The quality of these might be lower, but so are the prices. Note also that Mirabell Mozartkugeln and other sweets are sold on the airport at an acceptable rate, so that you can buy your Mozartkugeln last minute.