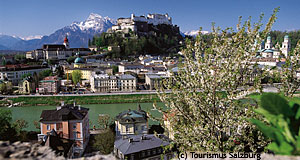 Note: If you are looking for a Salzburg Travel Guide, this is a great website to start reading - click here for our sightseeing section.

Where is the Austrian city of Salzberg? Good question. We don′t really know, but it must be a popular place: common search engines show a record of several thousand websites that provide users with travel information and background knowledge about this peculiar place.

On a more serious note: Of course there is no such place anywhere in Austria, and it is certainly not the city this site is dedicated to - in fact, it is an apparently very common orthographic mistake that misleads thousands of potential visitors to mediocre sources. Well, not all of them - apparently you just made it to the web′s most extensive travelguide to "Salzb- U -rg" in the heart of Europe.

But what about all the Salzberg-fuzz? "Salz" is German and means simply "salt", "Burg" means "castle" and the compound noun of "saltcastle" refers to the city′s historic significance in alpine salt-trade along the Salzach River Valley towards southern Germany and Bavaria. For all German native-speakers, the meaning of the name is apparent and it is unlikely that anyone would misspell it.

With English native speakers, the whole situation is a different one. "Burg" is pronounced as in hamburger; however, "Berg" is pronounced in pretty much the same way, leading to the phonetic merging of the words into the final "Salzberg". In terms of the meaning, it would actually make sense: "Berg" means mountain, and "Saltmountain" would be quite a reasonable name for a city in Austria.

This might also be the root for the surname "Salzberg", which is a very unusual one. According to Austrian linguists, this surname could be derived from protestant emigrants that were expelled from Salzb- U -rg in the 17th century under the reign of Prince Archbishop Wolf Dietrich von Raitenau.

Over the years, the place became little more tolerant and in 1731, Prince Archbishop Firmian signed another edict that lead to the expulsion of more than 20,000 Protestants. Under very difficult circumstances, they left for the German Kingdom of Prussia, where the protestant ruler Friedrich Wilhelm I. welcomed many of them as settlers for Eastern Prussia.

Over the years, many Protestant families moved on to a new life in North America, and until today you find communities in Georgia that are directly derived from these settlers.

A former Salzberg in Poland

It can be assumed that at least some of the emigrant families were called "Salzb- U -rg" which then underwent the same mispronunciation as the city that transformed their surname into the final "Salzberg". As a surname, the word is virtually as unknown as any Austrian cities of that name.

However, there is an alternative explanation that relates the origin of the word to a city in Poland that is now called Bochnia. As a place, it is actually quite famous for having the World′s oldest salt mine that is still in use as well as a number of historic chambers and chimneys. Beyond that, the historic city centre is a noteworthy attraction for tourists.

Before the end of World War I, Bochnia was part of the Austria-Hungarian Empire and administered as a place called Salzberg. Whether or not this is related to the American surname is unclear, but at least this detail proves that Austria indeed once had a town of that name.

Why bothering - you′re at the right site

Whatever the source of the confusion is, it is a funny story how many people still want to travel to Salzberg - its fame probably based on the movie "The Sound of Moosic" or the celebrated composer "Wolfgung Amadayus Mowtsart". Finally, we would like to draw a bottom line: facing a high number of requests for "Salzberg" in our website traffic logs, we decided to add this article.

However, even though it might be a cool name, there is no such place - anymore. And the one there was is now in Poland. If you want to travel to Salzb- U -rg, you will find all sorts of helpful information on where to go and things to see on this website. We wish you well for your trip and hope that you won′t get lost on your quest for Salzberg!

Information on Salzberg in Poland