Salzburg Shopping: Where & When 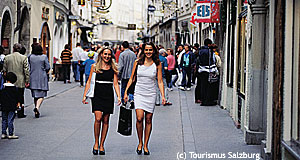 Salzburg is a very expensive city - one of the most expensive in all of Austria. Therefore, one thing might surprise you: Salzburg is considered to be an international shopping paradise. These two facts lead to a simple conclusion: Most of the lucrative shopping in Salzburg targets a high-end clientele, often drawn to the city from all over the World during the Salzburg Festival.

Especially the old town (Altstadt) has several lanes and alleys that are packed with international designer stores, boutiques and jewellery shops. Note for example the area of Getreidegasse, Judengasse, Alter Markt and Goldgasse: Apart from a handful of traditional, often family-run shops like bakeries or butchers, this area is full with art galleries (of rather low quality, be warned!), bag and leather accessories stores, fashion, jewellery, watches and other luxuries.

Note also the Augarten porcelain store: Flagship stores like this can often be found only in the first district of Vienna - and here in Salzburg. These shops make most of their money from the international jet-set that resides in Salzburg in summer. The traditional shops mentioned above target a combination of locals and "ordinary" tourists.

Exclusive Shopping in the Old Town

If you go shopping in this area, you will find artisans and craftsmen producing traditional costumes (dirndl dress for women, lederhosen for men), foods and drinks (try for example the many local varieties of schnapps), pastries and sweets (most famously the Salzburger Mozartkugel), record stores specialising on rare recordings from the festival since its early days and all sorts of other shops. Note for example the oldest bookshop in the German-speaking world, the Höllrigl, or the Baroque "Court Pharmacy" of the Prince Archbishops (both can be found at or near Alter Markt Square).

If you want to go shopping like a local, we got two recommendations: The area of Linzergasse is also well-known for its many small, independently run shops. However, it is less fancy than the stores in the old town and significantly cheaper. The selection of items is less exclusive, too. Alternatively, you can go to the area of Maxglan, not a typical shopping neighbourhood at all, but a traditional, middle-class residential area with lots of traditional specialist shops. For the global shopping experience, you will have to go to one of the shopping malls on the outskirts of Salzburg (this is the second piece of advice we have).

Smaller shopping malls include the Zentrum im Berg (ZIB) in Schallmoos; the Forum at the station; the Kiesel Passage half way between station and city centre; the Zentrum Herrnau half way between city centre and the south; the Shopping Centre Alpenstraße in the South; the Airportcenter for outlet designer clothing (the worst of them all); and finally, the biggest and most important shopping mall of Salzburg: The Europark. Here you will find 130 individual shops, modern facilities and all the consumerist frenzy you could possibly ask for. The Europark is one of Austria′s biggest and its most modern shopping mall. Note the IKEA there in case you are moving to Salzburg permanently.

Opening hours: Typically Monday to Friday 10 am to 6 pm; Saturday 10 am to 5 pm for small shops in the city centre; supermarkets and shopping malls often open until 7 or 7.30 pm on weekdays; the Europark stores are open Monday to Thursday 9 am to 7.30 pm, Friday until 9.00 pm and Saturday 9 am to 6 pm. On Sundays and holidays, only souvenir shops, shops at stations and petrol stations are open (but usually more expensive than ordinary supermarkets).