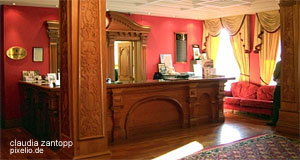 In German, the term Gasthaus means "guest house" and refers to a variety of facilities. Most commonly, a Gasthaus guest houses are inns with a couple of rooms that are run in a way similar to a slightly bigger B&B. In Salzburg, there are very few guest houses in the city centre.

Note that Salzburg is among the most touristy cities in Europe, and guesthouses normally serve a clientele that is looking for small, family-run and rather cheap places. Those guest houses that have existed in Salzburg have often been transformed into restaurants or just inns; or they extended their over-night offers and are now larger, modern hotels, usually of the four star category.

Where to Find Guest Houses

If you want to stay in a Gasthaus / guest house, you will have to look at the outskirts of Salzburg. However, even there you will find places that still call themselves Gasthaus or Wirt (landlord or rather innkeeper) to hint at their origins, but have long been transformed into professional hotels. For a high density of traditional guest houses in the vicinity of Salzburg, we recommend to extend your search to the communities in the wider outskirts and surroundings of Salzburg. Have a look at villages such as Großgmain, Eugendorf, Puch, Elixhausen, Hallwang or Grödig. However, even here prices will still be pretty high, since these villages are popular with package coach tours.

If you are looking for bargain deals and traditional guest houses, you would ideally travel by car. Look especially for the villages and towns of the Salzburg Lakes area (Salzburger Seenland): Not only do they lie within one of Salzburg′s nicest corners in terms of landscape, they are also generally a great deal cheaper than the immediate surroundings of the city. Villages such as Seeham, Mattsee, Obertrum, Seekirchen, Neumarkt or Henndorf are within 20 minutes drive from the city and have a range of guest houses and private pensions.

Note that there are also associations of farms that let rooms - in German, this is called "Urlaub am Bauernhof" (Farm Holidays). These rooms can be even cheaper and more authentic in terms of Austria-exposure. Private B&Bs (Pensionen) can also beat the guest houses in terms of price.

Finding a Hotel in Salzburg