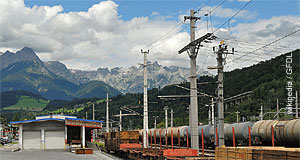 Bischofshofen is a city in the Pongau region of Salzburg, approximately 50 kilometres south of the capital. Bischofshofen has a population of 10,300 people, which makes it the biggest community of the Pongau. It is situated in the Salzach river valley, the main valley of the province, and surrounded by high mountains: The Hochkönig, but also the Hochgründeck and the Tennengebirge mountain range.

Bischofshofen is a good base for hiking or skiing, but not a skiing town in the strict sense of the word. It is internationally famous for its ski jump, which is one of the biggest of its kind worldwide and the last destination of the "Vierschanzentournee". This sport event is done on four ski jumps, of which the one in Bischofshofen is the final and thus decisive one. The event is held annually and the part in Bischofshofen takes place on epiphany.

Regionally, Bischofshofen is also an important centre for trade and shopping, as well as a railway hub. For international tourists, Bischofshofen might be a stop-over destination on their way to the skiing towns. For those who want to have a closer look, there are a couple of sights worth noting. For example the town museum, where you can learn more about the 5,000 years of history that the region can look back to.

The town museum "Am Kastenturm" got plenty of history to show: About the Neolithic tribes that were the first to mine copper ore near today′s Bischofshofen, the later Celtic and Roman settlers, the Bavarian foundation of a monastery through the Archbishop of Salzburg and a noble family from Oberalm, the destruction of this monastery by Slavonic tribes that moved into the area, the rise to an important administrative centre and residence to the Bishops of Chiemsee, the turbulent 16th century with its natural disasters, economic decline and religious warfare and finally the rise to a railway hub in the late 19th century.

Other attractions beyond town museum and ski jump include the parish church and the chapel of Buchbergkircherl with a good look-out. Speaking of outdoor attractions: Note the Gainfeld waterfalls or the ruined castle of Ruine Pongowe (which gave its name to the Pongau region) if you want to do some hiking in the area.