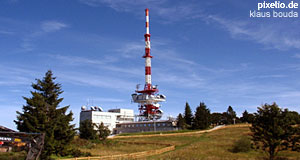 The Gaisberg is a mountain to the East of Salzburg and can be readily identified even by foreigners: it′s the one with the massive antenna on top of it. The antenna is actually a sending station of the public broadcast and ugly at first sight - but one gets used to it.

The mountain itself is among the local′s favourite and all year round a destination for people with sportive ambitions or a need for some wilderness just outside of Salzburg. The appealing bit of the Gaisberg is the fact that you can get on top without any exhaustion: a comfortable road leads up to the mountaintop.

The so-called "Gaisberg Panoramastraße" was built in 1928. By then, the World economic crisis had struck the weak first republic of Austria particularly hard, and the province of Salzburg sought to fight unemployment by building random roads up the mountains Gaisberg and Großglockner.

Hike one of Salzburg′s best mountains

In fact, it wasn′t quite random: the officials, including Governor Rehrl - who was acquired merits for building the festival halls - intended to boost the tourism in Salzburg. Until today, you might find cars of that period on the Panoramastraße.

Every year in June, an old-timer car race is held up the Gaisberg Mountain, one of the biggest events in Europe, starting from the Residenzplatz. The Gaisberg mountaintop is 1.300 metres high - but to get decent views, you will have to go only up to about 1.000 metres, where the "Gaisberg Rundwanderweg" starts. This is a 5 kilometre (about one hour) walk around the Gaisberg.

It is also called the "balcony of Salzburg", and starts at Hotel Zistelalm. From this route, you will be able to see a lot of the Salzburg valley, the surrounding mountains and the Wallersee Lake. It is a very rewarding route that is not too exhausting.