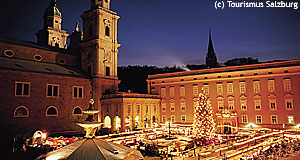 The Old Town, the fortress, the numerous castles and all the other famous squares and places in and around Salzburg do not only spray their flair in the summertime, but also have their own charm in Christmas- and wintertime. After a romantic walk over the city hills, which offer a stunning view over the snowy rooftops, cupolas and towers of Salzburg, a visit of the Salzburger Christkindlmarkt (Christmas Market) is the traditional highlight during the pre-Christmas season.

Salzburg′s most famous Christmas Market, situated within the great scenery of the Dom and the Residenz Palace, usually opens its doors five weeks before Christmas. Every year, visitors can enjoy choirs, musicians playing French horn and trombone and pastoral plays. The sweet smell of roasted almonds, hot chestnuts, mulled wine ("Glühwein") and glogg ("Punsch") attracts the Old and the Young. Surrounded by the sound of the choirs, musicians and church bells, people walk through the peaceful market admiring the artful crafts and indulge themselves in remembrances of their childhood.

In specially designed wooden market stalls at the Dom Square and Residenz Square, artisans, confectioners and other merchants offer gingerbread hearts, sweets, figurines for the nativity scene, toys, warm pullovers and other specialities of Salzburg.

500 years ago, at the end of the 15th century, the Salzburger Christkindlmarkt was first mentioned as crafts market in front of the Salzburg Dom. In the 17th century the market was called "Nikolaimarkt" (St. Nicolas Market) and became famous as one of the first Christmas Markets besides Vienna, Paris, Amsterdam or Nuremberg. After long discussions about the length, the period of the market was defined from 11th November to 24th December in the municipal market regulations in 1903. Between the two World Wars, the market was closed in 1932 and was established again in 1972 at his original spot in front of the Dom.

Besides the famous Christmas Market in the Old Town of Salzburg, there is another well-known market in the south of Salzburg at Hellbrunn Castle. The market gained its present-day publicity only during the last few years. Apart from the fantastic scenery of Hellbrunn Castle, the reindeers, sheep and goats, the double spruce and the crafts exhibition are among the biggest highlights. Furthermore, it is worth getting a glimpse of the oversized Advent calendar consisting of exactly 24 windows of the castle′s façade.

Other Christmas Markets in & around Salzburg

In the city of Salzburg you can find other Christmas Markets at Mirabell Square in front of Mirabell Castle, at the Salzburg Fortress and also in front of the railway station. Moreover there are small Advent markets in nearly every village at least at one weekend in December, the biggest ones at St. Leogang, St. Gilgen and St. Wolfgang im Salzkammergut.