home > general info > vacation  planning > what to do in winter

Salzburg around Christmas: What to do in Winter 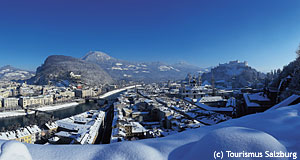 What are the places to go when winter rules over the city of Mozart? What are hot things to do during the cold season? Fact is that Salzburg is so popular during the "Advent" or Christmas Season that hotels often start to charge peak season fares. The following points are a winterly "must-do" list that aims to help you spotting great things to do during winter:

1.) Go skiing: Of course, skiing one is on top of the list. It is the main reason why tourists come to Austria in the winter; and some of the finest ski areas of the Alps can be found in the South of the Salzburg Province. You can also snowboard, ride a sledge, go cross-country skiing or skating - winter sports are big in Salzburg.

2.) Eat Lebkuchen and drink Glühwein: Traditionally, people in Austria bake Christmas cookies and pastries in the Advent season - often, they become real competitions for the best ones. Christmas markets and bakeries will offer a variety of them to choose from - the same applies to mulled wine or Glühwein, which is sold on market stalls all over the city.

3.) Go to Christmas Markets: The Christmas markets of Salzburg are famous all over Central Europe. Although it is likely that you will get annoyed by the crowds and masses of people, you should not miss the very special atmosphere between caramelised almonds, crafts and culinary delights.

4.) Go to a sauna and spa. Generally, you would think "Scandinavia" when you hear sauna, but Austrians are real sauna aficionados themselves and hundreds of spas - normally with their own hot springs - allow you to swim in hot water outdoors at temperatures below zero. There is nothing like running out of a sauna into the snow, naked and steaming!

5.) Go to a Perchtenlauf: Especially during the early time in Advent and - in the mountainous areas in the South - during the Rauhnächte Nights there will be Perchtenläufe. These Celtic, pagan traditions in which young men dress as demons were blended into the Christian teachings and are still part of local customs. Not for the light-hearted, these events are Alpine heritage at its best!

6.) Stroll around the City centre: Actually not necessary to point this one out, but many lanes and alleys of Salzburg's Old Town are particularly charming during the Christmas season. In particular the shops of the Getreidegasse and the Goldgasse are often beautifully decorated. Try to avoid the crowds, though, they can be very invasive around this time of the year.

7.) Get some "local culture" exposure: You could go to the "Salzburger Adventsingen", a traditional play in which local children sing in regional dialects a nativity play. You could go to exhibitions of Nativity Scenes; it is a craft with many friends in Salzburg, the stable of Bethlehem normally displayed as an Alpine cabin with the Holy Family carved in wood. Or you check out the "Salzburger Heimatwerk", a culture and traditions association for events typical for the region.

8.) Enjoy the parties and fireworks at "Silvester", the New Year′s Eve. You can join thousands of locals and millions of Italians partying and cheering with Champaign, waltz and fire crackers when welcoming the New Year.

9.) Track down the history of "Silent Night": The most famous Christmas Carol of all times was written and composed in Oberndorf, a charming town north of Salzburg. You can learn about the story of the song in the "Silent Night" museum in Salzburg, or at the site where Silent Night was first performed in Oberndorf. On the way there, you can also stop by some of the small towns in the Salzburger Seenland (lake district), such as Seekirchen or Mattsee. They have their own Christmas markets and distinct charm.