Lanz of Salzburg:
The Story of a very Successful Nightgown 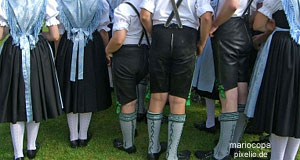 "Lanz of Salzburg" is a brand known especially in the United States, a producer of high-quality nightgowns, classic pyjamas and other sleepwear. In addition, the name Lanz is concerned with one of Salzburg's most exclusive producer of traditional costumes. The US brand is famous for its so-called Tyrolean pattern that might have been designed to recall images from mother and daughter in "The Sound of Music".

However, much like this movie, Lanz of Salzburg is not too much related to the city of Mozart - in fact, it can be perceived as a typically American brand, where many people perceive "Lanz of Salzburg" mother of all pyjama tailors - but it is hardly known in Austria. Even more surprisingly, the nightgown makers pre-date "The Sound of Music": Lanz of Salzburg sells its flannel pyjamas and cotton gowns for more than 60 years.

The relation to Salzburg, however, is purely historical. "Lanz" is a common last name in Austria and the font in the logo that the nightgown producers use, resembles a typical Austrian handwriting from the early 20th century. Since the brand tries to emphasise the image of homely, alpine and family-oriented atmosphere in which mother and daughter wear matching sleepwear, one can easily imagine where the reference to Salzburg comes from.

The Salzburg Lanz family business that produces traditional costumes for a high-end clientele makes the confusion even worse. As we mentioned before, this is not an unusual name at all, but in this combination still rather funny: The Lanz family in Salzburg has a well-established business that dates back to 1922, and if you ask locals about clothing and Lanz, it is almost certain that they will guess you are talking about the Tracht-tailor.

Originally, "Tracht" was the costume of peasants and farmers in the rural parts of Austria. Although often very expensive and elaborate for festive purposes, tracht was hardly worn by urban people. Lanz aimed to change that and in combination with a shoemaker and a saddler′s workshop, they started their business in the heart of Salzburg′s old town.

With the up rise of Salzburg as the site of a famous music festival, many celebrities came to the city in the summer and got into touch with the Austrian tracht. Lanz had a number of celebrities purchasing clothing from its store, including Marlene Dietrich, Herbert von Karajan, Elisabeth Taylor, Billy Wilder and Placido Domingo.

Back to the "sleepwear Lanz": Do not think that every Austrian necessarily has to wear nightgowns and pajamas of that particular brand - not even of that style. In fact, most Austrians would probably react rather confused if you asked them about Lanz. There is neither a factory nor a distributor of "Lanz of Salzburg" products in the city or province of Salzburg, to if Austrians were keen on flannel, they would probably have to order online.

This, however, could prove to be an easy task: many American companies sell Lanz nightgowns not only directly in retail, but also through the internet. And so "Lanz of Salzburg" might eventually come back to its roots - back to the Alps, from where the brand got its original inspirations.

Until then, you can browse this website to learn more about the "real" Salzburg, the way locals perceive and experience it. Maybe you will discover even more stereotypes not matching reality - though we hope that the Salzburg that you will explore will meet only the best of your expectations.