"The Sound of Music":
Salzburg′s most hated & loved musical 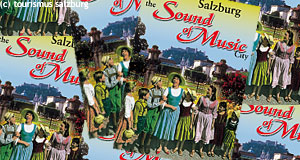 The very first thing to say about this article: Most people from Salzburg don′t know "The Sound of Music" unless they work with tourists. If they do, it is likely that they hate the movie. So do we.

Well, let′s be fair: it′s a bit tacky. Very tacky. But fair enough, those were the 1960ies and it was Hollywood… however, don′t expect natives from Salzburg to cheer up every time you ask them to sing "Edelweiss". Try to understand it: the musical distorts Austrian history and culture, is virtually unknown in Austria and yet still it is the main reference point to Austria for many visitors from all over the World.

For the longest time, it was our policy at www.visit-salzburg.net/ to refrain from adding a section on "The Sound of Music". This website is intended to provide visitors with local, genuine, proper advice - and "The Sound of Music", like it or nor, is about anything but authentic.

However, we fully acknowledge that it is a seriously popular movie and after Mozart and the Salzburg Festival the top-reason for international visitors to go to Salzburg. And so we decided to add information on the movie and the sites that it was made at. Here we go:

"The Sound of Music" is based on the memoirs of Maria von Trapp and the earliest film record dates back to "Die Trapp Familie" ("The Trapp Family") from 1956, a German-Austrian production hardly known these days but back then followed by a sequel in 1958: "Die Trapp-Familie in Amerika" ("The Trapp-family in America").

Later on, "The Sound of Music" was made a Broadway musical in 1959 with music by Richard Rodgers and lyrics by Oscar Hammerstein II. The book was by Howard Lindsay and Russel Crouse and based on the story of the Austrian Trapp family and the memoirs of Maria von Trapp "The von Trapp Family Singers". It was produced at the Fontanne Theatre and won Tony awards in 1959. It also yielded a best-selling album on Columbia and ran for 1,443 performances.

In 1965, the successful musical was made a movie in the original locations in Salzburg and surroundings. The "Sound of Music" movie was directed by Robert Wise, who won an Academy Award Oscar for Directing for this film. It starred Julie Andrews as Maria von Trapp. Oscar Hammerstein had died before the film was made and two songs were written by Richard Rodgers only: "I have confidence" and "Something good".

"The Sound of Music" tells the story of Maria, who is studying and preparing herself to becoming a nun at the Nonnberg Abbey in Salzburg. Since the nuns feel that she is not ready for being one of them, she is sent from the convent to the villa of the Trapp family to serve as a governess. The von Trapps consist of a widowed, noble naval commander, Kapitän Georg Ritter von Trapp, and his seven children.

The seven children are originally hostile against Maria, but they gradually come to like her and eventually - it′s Hollywood, remember? - Maria falls in love with Kapitän von Trapp. Unfortunately, he is soon to be married to an evil baroness, but after some hassle marries Maria instead. Probably because Maria teaches the children to sing particularly well.

The Hills are alive...

When the Nazis occupy Austria, they try to force von Trapp back into service. Whilst performing in the guarded Felsenreitschule in the Salzburg Festival Hall, they flee and escape climbing the mountains to Switzerland (although the movie actually shows Untersberg Mountain starring as Switzerland).

Apart from gross distortions of the real story, the movie and musical also changed some details from Maria von Trapp′s book: The Captain′s oldest son was a boy and not Liesl, and the names of the children were changed, too. The repertoire of the actual Trapp Family Singers was entirely classical, and - we are surprised - not 1960ies Broadway musical songs with a touch of Austrian-style folklore.

Furthermore, Maria and the Captain had married in 1927, so quite a while before the Nazi occupation in 1938. When they fled, they did that by taking a train to Italy rather than hiking to Switzerland, which is about 300 kilometres away from Salzburg. That much about authenticity.

With "Do-Re-Mi" around the World

The musical was produced several times for major stages all over the World. In 2005, it was played at the Volksoper in Vienna - the first production in Austria. Meanwhile, a cult and industry has evolved around "The Sound of Music" in Salzburg, with souvenirs, a "Sound of Music Dinner Show", "Sound of Music Tours" and every sort of tackiness one can possibly imagine.

The more surprising is the fact that it still remains largely unknown. To locals from Salzburg, "The Sound of Music" is still "that musical that tourists like". The only place where it is screened frequently - or 24 hours a day, in extreme cases - is the youth hostels in Salzburg.

Taken all sales together, "The Sound of Music" is one of the most successful musicals and movies of all times. The show was performed about 1,500 times with the original production only, it won 6 Tony Awards and records sold more than 3,000 times. The movie is considered to be the second-largest grossing picture ever, behind "Gone with the Wind" and was won 5 Oscars.

In 2001, the United States Library of Congress classified "The Sound of Music" as "culturally significant". In terms of sold tickets, the movie ranks third in terms of both, number of sold tickets and profit, again behind "Gone with the Wind" and "Star Wars".