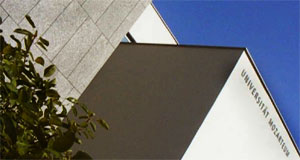 The Mozarteum is one of the Universities in Austria and one of four Universities in Salzburg. As an academic institution, it is dedicated to Art and Music. After Salzburg had been plundered by the Bavarians during the Napoleonic wars and become part of Austria in 1816, its economy was only slowly recovering. However, with the rise of romanticism Salzburg discovered its musical heritage and local hero Mozart over the course of the 19th century.

A big turning point in the history of the Mozarteum was in 1870, when the International Mozart Foundation was created that aimed to support gifted musicians - especially young ones. In 1931, the Mozarteum was supplemented with the "Zentralinstitut für Mozartforschung", the central institute for Mozart research. It is among the top-institutions doing research on Salzburg′s most famous son. Since 1953, it publishes the "Neue Mozart Ausgabe".

The Mozarteum conservatory received the status of an academy in 1970 and since 1998, the Mozarteum University is officially a "Universität für Musik und Darstellende Kunst", a University for Music and Fine Arts. These changes were mostly legal ones and did not have a very strong effect on the practice of teaching world class music - in the heart of Salzburg, next to the Mirabell Gardens in what has been the Primogeniturpalast Palace.

In the late 1990ies, several Professors at the Mozarteum suffered from rare kinds of cancer that implied a contamination of the building. Although the detailed causes for the illnesses remained unclear, most of the Mozarteum building was torn down and rebuilt or extensively refurbished until 2006 - the year of Mozart′s 250th birthday.

Today, the concert hall of the Mozarteum remains one of the most impressive halls of Salzburg and it is worth checking out the schedule if you are in Salzburg - especially students can get bargains with last-minute tickets. The Mozarteum University is among Austria′s most international academic institutions with a foreigner rate of about 50 percent. In its shiny new building behind the Baroque façade, it is an icon of Salzburg and as such, looking into a bright future. See also our articles on the Fachhochschule Salzburg and the Medical Univeristy if you are interested in academia in Salzburg.