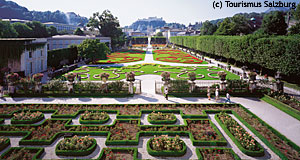 The world-famous Mirabell Gardens were built along a north-south axis and oriented towards the Hohensalzburg Fortress and the Salzburger Dom cathedral. The original gardens were re-modelled according to plans by Johann Bernhard Fischer von Erlach under the reign of Prince Archbishop Johann Ernst Thun in 1689.

Only some decades later, Franz Anton Danreiter altered them again in 1730, shaping what is now considered to be one of the most beautiful Baroque gardens of Europe. In the 19th century, the Mirabell Gardens were changed once again, several parts were destructed, such as the original Zwergerlgarten (dwarf garden), some arcades facing Mirabell square and the so-called Sala terena in the Northwest of the Mirabell Castle.

The "Grand Parterre" is the oldest part of the Mirabell Gardens that is still preserved. If you enter the parterre from the Makartplatz (where Mozart′s living house and the Doppler birthplace are), you will encounter an inner and outer balustrade that is flanked by copies of the two Borghesian fencer couples from the late 17th century. The inner couple was made by A. Götzinger, the outer one by M. B. Mandl.

On the balustrades themselves you will see statues of Roman gods from 1689: Diana, Flora, Minerva, Ceres, Pomona. Venus, Vesta, Juno and Chronos, Bacchus, Jupiter, Mars, Hercules, Vulcan, Hermes and Apollo. These statues were made by B. van Opstal.

The Grand Parterre is embraced by a marble railing decorated with vases by Fischer von Erlach. In the heart of the garden, you will see a large fountain, with four statue groups around it: the rape of Prosperina, rape of Helena, Aeneas and Anchises, and finally Hercules and Antaeus. These statues were made by Ottavio Mosto in 1690.

Next to the main part of the Grand Parterre, set apart a little towards the Mirabellplatz Square, you will see a court with a Papagena fountain echoing the Papageno Fountain near the Pfeiffergasse. This court also hosts the "Orangerie", which is still used as a greenhouse and can be visited without charge. To the opposite of the Orangerie there is a pavilion that is used by the "Salzburger Barockmuseum", the Salzburg Museum of Baroque.

Mirabell Park featuring in "The Sound of Music"

However, the Pegasus was made of copper by Kaspar Gras for the well on the Kapitelplatz near the Salzburger Dom cathedral in 1661. There it stayed until 1690. After that time, it was used for the well on the Mirabellplatz Square until the great fire of 1818, and finally transferred to its current location in 1913.

Half way through the arcades, you can enter the hedge maze with the "Heckentheater" or "hedge theatre", a playful touch in the most wonderful Baroque tackiness from 1717. The Heckentheater is still used for performances in the summer, including concerts of the Salzburg Festival.

Walking your way up northwards, you get to the new "Zwergerlgarten" or "Salzburg dwarf garden" on an old bastion. It is a display of grotesquely deformed dwarfs, some of who actually lived on the court of the Prince Archbishops of Salzburg. The Zwergerlgarten was originally built under the reign of Prince Archbishop Franz Anton Harrach in 1715, but re-modelled since then.

North of the Zwergerlgarten you will get over the Freitreppe stairway from 1894 to the "Vogelhaus" or "Voliere", a house with an iron grid dome in which birds were kept for display to please the Prince Archbishop and his guests. It dates back to 1700 and is used for the display of art exhibitions today.

North of the Vogelhaus is the beginning of the extensive Mirabell Park, including the "Rosenhügel" or "Rose Hill" with a beautiful view all over the Small Parterre towards Salzburger Dom and Hohensalzburg Fortress. Especially in the evenings this spot is considered to be a meeting point for homosexual men.

Click here to find the Mirabell Gardens on our Salzburg Map