Salzburg Palace: Which one? 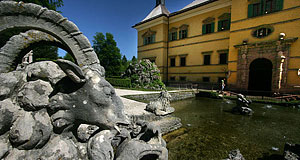 Many tourists who come to Salzburg figure that it was an independent principality for most of its history - in fact, until the early 18th century. Only in the course of the Napoleonic Wars it fell first under Bavarian rule and in 1816, Salzburg turned Austrian. Until then, powerful and rich Prince Archbishops ruled the funny little county between Bavaria and the Habsburg Empire. Many tourists wonder, where they resided - they are looking for the "Salzburg Palace".

Alas, there is no such thing as a single, main Salzburg palace. In fact, there are several palaces that served as representative seat, as fortification or as a place of leisure. This article aims to provide an overview on the most important palaces and palatial buildings in Salzburg city.

The Most important Palaces of Salzburg

1.) The Residenz Palace: The most important and official residence of the Prince Archbishops. It is now home to an art museum and open to the general public as one of the most important sightseeing attractions of Salzburg. Can be found right next to the Salzburger Dom cathedral.

2.) Salzburg Castle (Festung Hohensalzburg): Primarily a fortress and thus a military building; however, the Festung also has state apartments from the late Middle Ages that justify the claim for it to be a palace. These state apartments (Prunkräume) served a purely representative purpose.

3.) Schloss Mirabell Palace: A Baroque palace famous for the Mirabell Garden; it was initially built as a leisure palace for the mistress of Prince Archbishop Wolf Dietrich von Raithenau, Salome Alt, in the early 17th century. In the 18th century and after a devastating fire in the early 19th century, Schloss Mirabell was re-shaped into its current appearance. Serves as the city hall of Salzburg and is partly open to the public. Gardens are open free of charge.

4.) Schloss Leopoldskron Palace: A Rococo leisure castle that famously featured in "The Sound of Music". It is home to the Salzburg Global Seminar, partly run as a hotel and not open to the public. Only the gardens can be visited, which many "TSoM" fans do.

5.) Schloss Klessheim Palace: Rococo palace finished only in the late 18th century; was extended and modernised in the 19th century and served as a retreat for an "exiled" Habsburg Archduke that had to leave Vienna after repeatedly reported homoerotic adventures. Today, Schloss Klessheim is home to a tourism school and the local casino. The casino and the gardens are open to the public.

6.) Hellbrunn Palace: The leisure palace in the south of the city comes with early Baroque architecture, a large park, follies and the famous trick-fountains. Hellbrunn was built in the early 17th century and is unique in its state of preservation and general appeal. One of the top-attractions of Salzburg that you should not miss.

7.) Schloss Frohnburg Palace and Schloss Freisaal Palace: Two smaller palaces on the Hellbrunner Allee, of which the former featured in "The Sound of Music". Both are not open to the public, but the walk along the alley is very nice, it links the Altstadt or Old Town with Hellbrunn (see above). About five kilometres (expect to walk about one hour).

8.) Schloss Anif Palace: The water palace was once the summer retreat for the Bishop of Chiemsee; it was re-built in the 19th century in romantic, Historicist style and is private property. Nevertheless, many visitors like to stop by since it is the third major Salzburg palace that featured in "The Sound of Music". South of Salzburg, already in the community of Anif.

9.) Other Salzburg Palaces: Salzburg lacked wealthy nobility, but the Prince Archbishops themselves were loaded enough to support a large number of representative buildings. In addition to the major palaces described above, the surroundings of Salzburg come with all kinds of castles and chateaux. In the city, you will find several smaller palaces that once served local noble families or close relatives of various Bishops. Please note our somewhat complete list of palaces and castles in Salzburg.

http://www.salzburg-burgen.at/
Website on the public castles & palaces in Salzburg