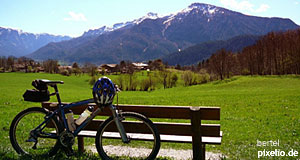 Another impressive mountain in the surroundings of Salzburg that is very accessible is the Untersberg. It is the biggest mountain near Salzburg and can be explored comfortably by using a cable car. The Untersberg is partly stretching into Germany and thereby serves as a natural border.

From the community Grödig near Salzburg you can get to the district of St. Leonhard, from where the cable car will take you up to the Geiereck peak. From there, you can enjoy a stunning view over the Salzburg valley, the city of Salzburg and its neighbouring communities and the mountains embracing them.

On the German side you will see far into the region of Berchtesgaden, where you would also find the "Eagle′s Nest", Adolf Hitler′s holiday resort that now attracts thousands of visitors every year that are willing to pay the horrendous entrance fees. It was never too popular with Hitler himself, but the allies made it a propaganda target to hit and thereby, made the "Kehlsteinhaus", as it was known in Nazi-Germany, internationally famous.

Heart of many Salzburg traditions

Back to the Untersberg: it is also a much-appreciated destination for people doing all sorts of sports. Rock climbing, hiking, paragliding, canyoning and other trendy ways to break one′s neck are practised on the rocky walls of the Untersberg. It is similarly popular in the winter for skiing, cross-country skiing, or winter hiking.

Another highlight of the Untersberg is the number of caves that the water drilled into the mountain. In fact, most of the water supply of the city of Salzburg is collected near Fürstenbrunn by the onset of the Untersberg mountain. Among the most impressive is the Schellenberger Eishöhle ("Höhle" means "cave") on the German side. The Kolowrathöhle is 16 kilometres long and among the few caves that can be easily explored with guides.

To many people the Untersberg is a spiritual place. In the community of Großgmain, one of a number of "energy spots" was built near the local church to refer to the Untersberg as a millennia old site of worship and spiritual search. This image is supported by the many legends and myths dealing with the Untersberg mountain.

Nature on the Doorstep of Salzburg

The most famous one tells the story of Emperor Karl (Charlemagne), who is said to be sleeping in the Untersberg Mountain, surrounded by his court and staff, and his most faithful advisors, knights and governors. He sits by a table made of marble and his beard is growing around it. Once in a while, the Emperor awakes and sends out a messenger to investigate whether there are still ravens flying around the mountain.

If they do - and they do - the Emperor falls asleep again and he will remain sleeping until his beard has embraced the table three times. Then he will stand up, take on his armour, gather his knights and leave the Untersberg to fight his final battle and start a court in the Walserfeld near Salzburg; Charlemagne′s doomsday.

Other legends tell the story of dwarfs and wizards going around the mountain, demons and wicked dogs. Many traditions and local customs that refer to the Untersberg are of pagan origin and today deeply woven into the Christian traditions of Salzburg, also expressed in local variants of Perchten.

http://www.untersberg.net/
Official website of the mountain (believe it or not) - opens in new window