Crappy 10: Things NOT to do in Salzburg 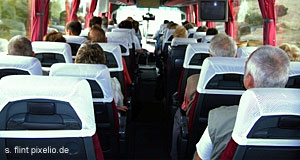 Salzburg is oh-so wonderful with its beautiful architecture, all its Baroque-ness and the general neat-and-tidiness of the place. In principal, we wouldn′t argue on that. But this website is about independent information; there′s lots of guides that will tell you things to do and all the places to see in Salzburg.

The one thing that the "Sound of Music" - Mafia will not tell you, is which things to avoid. And this is where we come into play, because we are neither paid by the local tourism office, nor any company - we can afford to feed you the horrible truth about rip-offs, tourist traps and the hidden naughtiness of Salzburg! Here we go: the 10 things NOT to be done by the responsible visitor.

1.) Don′t buy Mozart balls in the city center. No doubt you will encounter the sweet all over the old town, normally of the major brand Mirabell. However, one thing is certain: Mozartballs sold from market stalls or in souvenir shops are almost always horribly overpriced. Try to wait until you get to a supermarket or the airport.

2.) Avoid to move in herds. Especially during the summer months, vast numbers of visitors accumulate in Salzburg, which will make it difficult for you to experience Salzburg beyond its most shallow level. This website is designed to give a well-rounded image of the place, by reading it you prove that you want to find out more about Salzburg than just where Mozart was born. Don′t spoil it by surrounding yourself with dozens of people from your native country.

3.) You will get best value for money in terms of food on the right side of the Salzach River (where the Schloss Mirabell Castle is). Restaurants in the old town often serve high-end meals, but tend to be super-expensive. Try little side-alleys around Linzergasse or walk down Steingasse for the "Andreas Hofer Stüberl". These areas are still very central, but less touristy.

4.) Don′t buy food at the market stalls of the Augustinerbräu in Mülln. Despite of the place selling cheap drinks and being the best beer hall in Salzburg (if not Austria), the food of the market stalls is expensive. Guests are explicitly allowed to bring their own food, which many locals do - so stop by some supermarket or farm market to pick up your own snacks before you go there. Only drinks have to be purchased there.

5.) Don′t stop for drinks at a particular place that we don′t want to name here because we don′t want to get sued. Hint: it′s a very popular place with a very nice view over the Old Town, normally full of tourists and it has the grumpiest and rudest waiters in the universe. For drinks, look where locals go and go for uncrowded places especially during the summer months. There are some, just look for them in the alleys of the Altstadt area around the cathedral.

6.) Don′t pick the first organised tour you come across. There are several tour operators who organise guided tours with "Sound of Music" themes. Compare prizes or check online in advance what you really want to see and whether you couldn′t get there yourself by walking, a rented bicycle or public means of transport.

7.) Don′t give in to rude waiters! Many waiters that work during the summer months are seasonal employees that are often over-worked. They also know damned well that you as a tourist will most likely not come back to the place ever, regardless of whether you had a good or bad experience. As a result of stress and lack of dependence, waiters in Salzburg can be incredibly rude. Don′t accept that, go straight to the manager and complain, ideally with a loud voice and dramatic gestures. Remember that Austrians might speak German, but they are still Austrian - therefore, some Italian drama often kicks in really well when it comes to complaints.

8.) Don′t wear Canada-flags on all parts of your body if you are American. It is ridiculous and doesn′t work. Don′t worry: we know that not everyone of you guys has voted for George W., and since Austria doesn′t have any oil, we can still love you without fear, no matter if you are Texan or Ontarian. Oh, and by the way: Shorts, flipflops, backpacks, travel guides, cameras, sun hats, colourful shirts - don′t hide behind tourist-accessories, they will build a barrier between you and Salzburg. It′s best enjoyed with light clothing and an open mind.

9.) Don′t waste time going to areas north of the station. In fact, the only reason to spend time anywhere near the station IS the station (and the Basilica of Maria Plain) - and there′s a supermarket in the basement of the Kiesel Shopping Center. Otherwise, it′s an area of little appeal and neighbouring districts might even be a bit dodgy at night. Concentrate on the central bits and the south.

10.) Don′t order tap water without asking whether that′s alright. For some stupid reason, it is considered to be rude to order tap water in a restaurant in Austria. Since many tourists come from countries where this is not the case, some places started a few years ago to charge for tap water, often quite a lot. Check this first (the menu has to give the prices for all items available); or order still mineral water or "Soda Zitron" (carbonated water with a shot of lemon juice, usually the cheapest drink on the menu).

Things to do in Salzburg

http://www.slowtrav.com/other/notes/kd_salzburg.htm
Slowfood′s suggestion on things to do - opens in new window