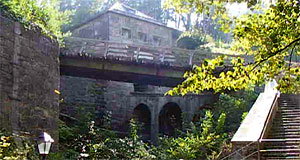 Most of the traffic along the north-south axis has always occurred on the eastern side of Salzburg. Traffic faring through the Getreidegasse, however, followed the same direction on the western side of the town. The heavy walls securing Salzburg had to be open on several spots to allow trespassers, carriages and horses to pass.

Apart from the Gstättentor Gate, the Klausentor and Mülleggertor gates were crucial for this. The Klausentor is opposite the Markuskirche and controlled the narrowest spot between the Mönchsberg Mountain and the Salzach.

This site was occupied by a wall and gate since 1280, but both were damaged in the great fire of 1612. Prince Archbishop Markus Sittikus rebuilt the Klausentor and Prince Archbishop Paris Lodron connected it to the walls that ran along the Salzach.

Securing Salzburg against invaders - except tourists

The gate consists of three floors and bears the coats of arms of Salzburg and of the two Prince Archbishops that were responsible for its current appearance. The Mülleggertor is within the Salzburg province′s main hospital, the Landeskrankenhaus.

It was part of the most northern extension of Salzburg′s city walls that were directly connected to the Mönchsberg fortifications. The Mülleggertor got its current shape under the reign of Prince Archbishop Markus Sittikus.

It is rather unusual that tourists go to see the Mülleggertor, but if you do, look for the paintings of saints embraced by stucco work on the eastern façade. For a long time, the gate was at the edge of the hospital, today it is in the centre of it.