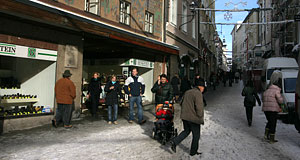 The Platzl is a small square at the onset of Linzergasse; it links several important neighbourhoods of the Old Town (Altstadt) of Salzburg on the right side of the Salzach River. The Platzl is the crossing between Staatsbrücke, Dreifaltigkeitsgasse, Linzergasse and Steingasse. Therefore, even though the square itself is not overly spectacular, we thought that it deserves some closer attention. The name "Platzl" means "little square", by the way, a rather appropriate characterisation.

Two events has shaped the Platzl particularly strongly: First when the Dreifaltigkeitsgasse was built in 1645 because Prince Archbishop Paris Lodron wanted to link his family′s palaces (Primogeniturpalast and Secundogeniturpalast) with the Linzergasse; and secondly, when the great fire of 1818 destroyed several buildings in this neighbourhoods, including the Kirche St. Andreas - the predecessor of the Kirche St. Andrä opposite Schloss Mirabell.

The Platzl as Intersection of Classes

The streets of Salzburg reflect the social division of the late Medieval and Baroque time rather well: The palaces were there for high-ranking clergy and nobility; rich merchants and wealthy civil servants lived on the left side of the Salzach in lanes like the Getreidegasse; artisans and small merchants preferred areas like the Linzergasse; poor people working as maids or labourers lived in narrow lanes such as the Steingasse. The Platzl was at the intersection of these spheres, but was mainly part of the "middle class" artisan area of the Linzergasse.

The funny thing is that little has changed about this divide ever since the Middle Ages - until today, you can find plenty of family-run shops and specialist craftsmen operating their businesses in the Linzergasse. Since the Platzl is directly linked with the more touristy and expensive left side of the Salzach River, it is now a popular area for bars, cafes and rather high-end stores. However, only a few steps on into the Linzergasse or Steingasse you will find the "little shops" again.

A few more details to note about the Platzl: House number 3 was home to the doctor and alchemist Theophrastus von Hohenheim, known as Paracelsus for about one year in 1540. He died in the Kaigasse and is buried at the cemetery of St. Sebastian, only a few steps further up Linzergasse. House number 7 is used by the Engelapotheke, the pharmacy where the expressionist poet Georg Trakl was an apprentice. Note also the Königsgässchen branching off next to it: The name means "Little King′s Alley" and is a mock name, since this was where the man lived who was in charge with cleaning the public toilets in Salzburg.

http://www.salzburg.info/en/sights/squares_streets/linzer_gasse_platzl.htm
Salzburg Tourist Information Centre on the Platzl and Linzergasse