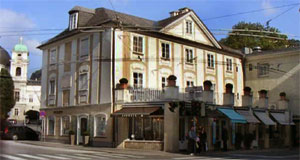 Christian Doppler is one of the many scientists, whose discoveries had a tremendous impact on mankind - a long time after he died. The Salzburgian physicist discovered in 1842 a shift in the frequency of waves if source and receptor changed their position to each other.

In other words: if a car blows its horn and is driving towards you, you will perceive the sound higher than it actually is; once the car passes you and now drives away from you, it will sound lower than it is - just think of the vrrrrrrrrooooommmmmm of a car driving by on the motorway.

The so-called "Doppler effect" is the principle for velocity measurements and a number of other applications, including radar technology, distance estimates in astrophysics or automatic doors.

However, he was re-discovered in the last couple of years and the policy of sacrificing the scientist to the music-image of Salzburg was luckily abandoned. Today, a hospital, a square and a bridge in Salzburg were named after him and a plate on the façade of his birthplace commemorates Doppler.

Most importantly though, the chocolatier Fürst, the inventor of the Mozartkugel, named a sweet after him - the "Doppler Konfekt". If you want to learn more about Christian Doppler, there is an exhibition on his discovery in the Haus der Natur natural history museum.